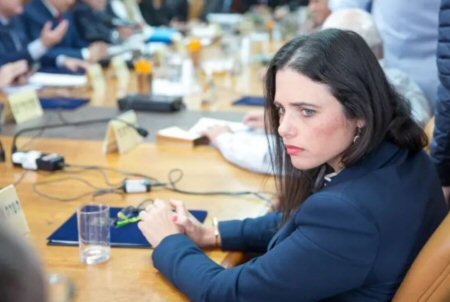 The Israeli-Palestinian peace plan being prepared by US President Donald Trump is “a waste of time,” extremist Israeli Justice Minister Ayelet Shaked said, on Wednesday.

Speaking before hundreds of ambassadors and attachés, at the Jerusalem Post Diplomats’ Conference, in Jerusalem, Shaked added that the differences between Israelis and Palestinians are too great.

“I want peace like everyone else,” she said, “but, I do not believe an agreement can be reached. I would tell Trump: ‘Do not waste your time.'”

Days of Palestine further reports that Shaked also spoke about the demand made by her party, the Jewish Home, to appoint party leader Naftali Bennett as defence minister – an ultimatum that threatens the stability of Israeli Prime Minister Benjamin Netanyahu’s government.

“The prime minister needs a strong defense minister at his side,” she said. “Unfortunately, he thought otherwise. We are a strong country, and Hamas is just a terror organization. But, in recent years, we’ve lost our deterrence.”

On Gaza, Shaked predicted the cease-fire will only last a few months, and then, “there will be no choice but to fight Hamas with all means.”

Earlier at the conference, Strategic Affair minister Gilad Erdan said that Israel is “closer than ever” to controlling parts, or all, of Gaza.

Erdan said that “moving from defense to offense against Hamas means targeted assassinations of leaders of Hamas’ military wing.”

This, Erdan said, “means being ready to take control of the Gaza Strip and hold it until we dismantle the terrorist infrastructure, Today we are closer than ever – since the devastating disengagement plan – to having to control parts of the Strip, or all of it.”