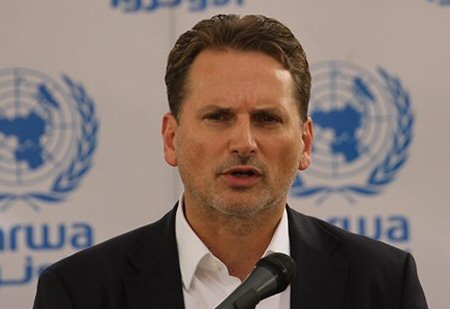 Addressing the delegates at the Advisory Commission of host governments and leading donors of the United Nations Relief and Works Agency for Palestine Refugees in the Near East (UNRWA), the Commissioner-General of UNRWA, Pierre Krähenbühl, applauded the resolve and creativity with which the agency and the international community addressed its “greatest financial predicament ever.”

Krähenbühl thanked the many partners who “rose to the occasion” to help, collectively, to reduce the staggering shortfall of $446 million, at the start of this year, and said, “Today, I am very pleased to announce that, overall, since January, donors contributed or pledged an additional $425 million, bringing our shortfall down to $21 million.”
He explained that, in response to this year’s financial crisis, UNRWA launched a global campaign called #DignityIsPriceless, bringing about a renewed spirit of multi-lateral cooperation.

He continued, according to Ma’an, “The collective mobilization is deeper and broader than we’ve seen in decades, accompanied by diplomatic engagement at the highest level,” referring to 40 Member States and institutions who either increased support or gave new pledges.

Krähenbühl stressed, “When we were able to open the 711 UNRWA schools on time, it was a moment of pure and simple celebration. We celebrated the preservation of the right to education for 530,000 girls and boys, from Aleppo to Rafah in the Gaza Strip.”

He also mentioned that UNRWA and its partners contributed to “one of the most successful human development processes for a refugee community in recent history.”