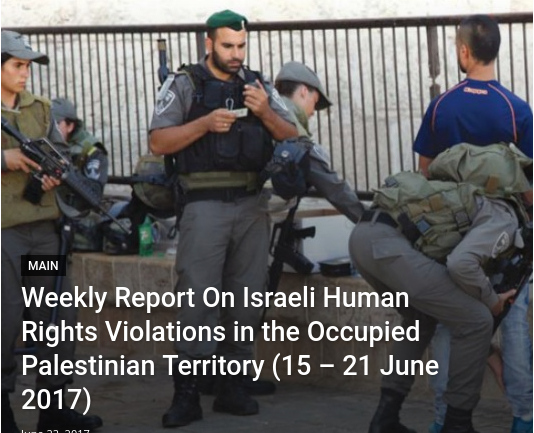 In the West Bank, on 16 June 2017, Israeli forces killed 3 Palestinian civilians from Deir Abu Mash’al village, northwest of Ramallah, and wounded three by-passers when Israeli forces opened fire at the three civilians, who carried out a stabbing and shooting attack in Sultan Suleiman Street at the northern entrance to Bab al-Amoud (Damascus Gate) in occupied East Jerusalem.

On 20 June 2017, Israeli forces stationed at Jaba’ military checkpoint, northeast of occupied Jerusalem, killed Baha’ al-Herbawi (23), from al-Eizariya village, east of the city. Israeli forces claimed that the killed attempted to carried out a stabbing attack against Israeli soldiers during an ordinary check-up at the checkpoint. The soldiers shot him dead.

In addition to the wounded persons mentioned above, on 17 June 2017, 2 other civilians were wounded during an Israeli incursion into Deir Abu Mash’al village, northwest of Ramallah.

During the reporting period, Israeli forces conducted at least 42 military incursions into Palestinian communities in the West Bank, and 8 others into Jerusalem and its suburbs. During these incursions, Israeli forces abducted at least 65 Palestinian civilians, including 6 children and 2 women. Twenty three of them, including the 6 children, were abducted in occupied Jerusalem and its suburbs.

Among those abducted was Zainab Mohammed ‘Ankoush (41), the mother of Adel ‘Ankoush who was killed by Israeli forces in Jerusalem on 16 June 2017, as well as Enaya Abed al-Khair Saleh (45), the wife of prisoner Saleh Sulaiman Ata. Both of them are from Deir Abu Mash’al village, northwest of Ramallah.

In the Gaza Strip, the border area witnessed peaceful protests against the illegal closure imposed on the Gaza Strip. Israeli forces used force against the protestors, as result, 7 Palestinian civilians, including 3 children, were wounded. Five of them were hit with live bullets and the two others sustained shrapnel wounds.

In the context of Israeli attacks against fishermen in the sea, on 17 June 2017, Israeli gunboats opened fire at and chased Palestinian fishing boats sailing within 3 nautical miles northwest of Beit Lahia, north of the Gaza Strip. The shooting recurred at the Palestinian fishing boats in the same area on 18 and 19 June 2017. As a result, the fishermen were obliged to sail back. Neither casualties nor material damage were reported.

Also in the Gaza Strip, on 19 June 2017, Israeli forces moved about 100 meters into al-Shouka village, east of Rafah, south of the Gaza Strip. They combed lands along the border fence between Israel and the Gaza Strip and withdrew later.

At approximately 18:30 on Saturday, 17 June 2017, a group of Israeli settlers from “Halmish” settlement, established on al-Nabi Saleh village lands, northwest of Ramallah, threw stones at the Palestinian civilian vehicles while passing through the main road leading to villages located northwest of the city. The Israeli settlers also carried out riot acts in the area and obstructed the vehicles movement for few hours.

Following the Friday prayer on 16 June 2017, dozens of Palestinian civilians and Israeli and international human rights defenders organized a protest in Bil’in and Ni’lin villages, west of Ramallah; al-Nabi Saleh village, northwest of the city and Kufor Qaddoum village, northeast of Qalqiliyah, in protest against the annexation wall and settlement activities. Israeli forces forcibly dispersed the protests, firing live and metal bullets, tear gas canisters and sound bombs. They also chased protesters into olive fields and houses. As a result, some of the protesters suffered tear gas inhalation while others sustained bruises as Israeli soldiers beat them up. Moreover, Israeli forces abducted Abed Ayed Srour (30), from Ni’lin village, and took him to an unknown destination.

At approximately 15:30 on Friday, 16 June 2017, dozens of Palestinian civilians gathered few meters away from the border fence between the Gaza Strip and Israel, east of al-Shuhadaa’ Cemetery, east of Jabalia in the northern Gaza Strip. They set fire to tires and threw stones at the Israeli forces stationed along the abovementioned border fence. The soldiers fired live bullets, tear gas canisters and rubber-coated metal bullets at them. The clashes continued until approximately 19:00 on the same day. As a result, a 22-year-old civilian from Jabalia sustained a live bullet wound that penetrated the left ear and wounded his neck. He was transferred to the Indonesian Hospital in Jabalia. His wounds were classified as moderate.

At approximately 17:00 in the same Friday, dozens of Palestinian young men made their way to the border fence between the Gaza Strip and Israel, east of al-Buraij in the central Gaza Strip, in rejection to the Israeli-imposed closure on the Gaza strip. The young men gathered near the security fence, set fire to tires, raised the Palestinian flags and then threw stones at the Israeli soldiers stationed at the border fence. The soldiers fired live bullets and tear gas canisters at the young men and the agricultural lands to the west of the abovementioned border fence. As a result, a child (PCHR keeps his name) sustained a live bullet wound to the left leg and other civilians sustained tear gas inhalation. The wounded child was taken to al-Aqsa Hospital in Deir al-Balah where medical sources classified his injury as moderate.

Around the same time, dozens of Palestinian young men gathered near the border fence between the Gaza Strip and Israel, east of Khuza’ah village, east of Khan Yunis. They set fire to tires and raised flags and banners condemning the Israeli closure on the Gaza Strip. A number of the young men approached the abovementioned border fence and threw stones at the Israeli forces stationed there. The Israeli soldiers fired live bullets and tear gas canisters for an hour and a half around the protestors to disperse them. As a result, 2 civilians (PCHR keeps their names) sustained live bullet wounds. They were transferred to Gaza European Hospital and their injuries were classified as moderate.

At approximately 17:00, dozens of Palestinian civilians gathered few meters away from the border fence between the Gaza Strip and Israel near Karm Abu Mo’amer neighborhood, east of al-Shawkah village, northeast of Rafah in the southern Gaza Strip, in response to calls for protests in the border area against the Israeli-imposed closure on Gaza. A number of the protestors approached the border fence, set fire to tires, raised the Palestinian flags and then threw stones at the Israeli soldiers stationed at the border fence. The soldiers fired live bullets at them. The clashes continued until approximately 19:00 on the same day. As a result, a 16-year-old civilian sustained a live bullet wound to the right leg, a 17-year-old civilian sustained a live bullet shrapnel to the right foot and an 18-year-old civilian sustained a live bullet wound to the left leg. The wounded civilians were transferred to Abu Yusuf al-Najjar in Rafah. Medical sources classified their injuries as moderate.

Due to the number and severity of Israeli human rights violations this week, the PCHR made several recommendations to the international community. Among these were a recommendation that the international community respect the Security Council’s Resolution No. 2334 and to ensure that Israel respects it as well, in particular point 5 which obliges Israel not to deal with settlements as if they were part of Israel.

PCHR calls upon the ICC in 2017 to open an investigation into Israeli crimes committed in the oPt, particularly the settlement crimes and the 2014 offensive on the Gaza Strip.