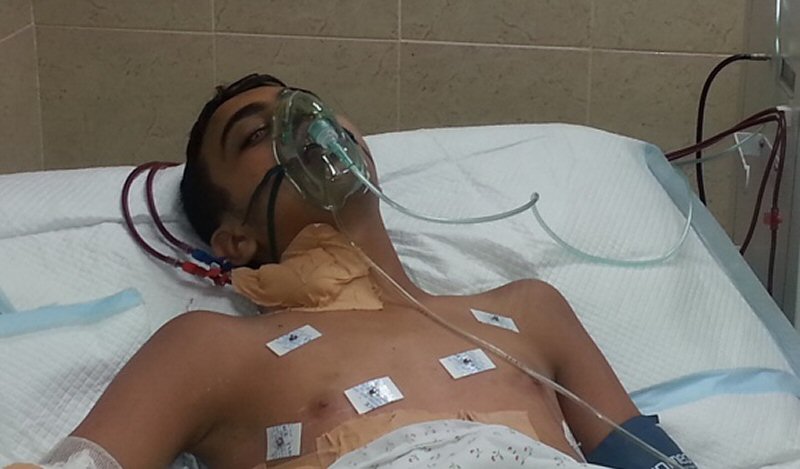 Israeli authorities denied 17-year-old Khaled Ghamri an exit permit to travel from Gaza to Jerusalem, for medical treatment ,after Israeli forces critically injured him during a protest near the Israel-Gaza border on May 23.

Israeli forces across the border fence shot Khaled, then 16, near Bureij refugee camp, in central Gaza, with live ammunition on May 23, critically injuring him. The bullet caused an arm fracture, damage to multiple organs, as well as severe bleeding that left him in a coma. On the treating doctor’s recommendation, the family applied for an urgent permit for Khaled and an escort to travel through the Israeli-controlled Erez crossing to Jerusalem for specialized care, but the permit was denied.

“We are waiting to transfer him to the hospital in Jerusalem, but we don’t know why Israel is refusing to let him in through Erez crossing,” said Khaled’s father to Defense for Children International – Palestine. “He has the right to be treated and return home to his family and his school.”

Dr. Iyad Jabri, the head of Surgery and Urology Department at Al-Aqsa Martyrs Hospital in Deir Al-Balah, told DCIP that a single bullet hit Khaled’s right arm, cut through a nerve and caused a fracture. The bullet exited from the other side of this arm, Jabri said, and settled in the right side of Khaled’s stomach, causing damage to the aorta, liver, right kidney, ureter, and intestines.

Khaled underwent surgery to remove his right kidney and repair damage to his aorta. Heavy blood loss carried the possibility of damage to other organs, including his brain, and caused a nine-day coma, according to Jabri.

While Khaled was still in a coma, on May 27, his family applied for permission for Khaled to exit Gaza for treatment in an Israeli hospital but the Israeli Civil Affairs Office handed them a denial decision, according to the boy’s father, Husni Ghamri.

On May 31, when Khaled recovered from the coma, he began daily courses of dialysis to remove toxins in his left kidney.

Ghamri said that he filed a second medical travel permit request on Khaled’s behalf on May 31 and is awaiting a response from Israeli authorities.

According to the World Health Organization (WHO), over 42 percent of Palestinian requests for medical travel out of Gaza were denied or delayed by Israeli authorities in April 2017. Of this number, three children were denied and 178 children were delayed care.

WHO also reported that three Palestinians, including a 5-year-old girl with cerebral palsy, died in Gaza in April while waiting for permission to leave for external treatment.

As a state party to the Convention on the Rights of the Child, Israel has obligated itself to recognize children’s right “to the enjoyment of the highest attainable standard of health and to facilities for the treatment of illness and rehabilitation of health,” as laid out in Article 24.