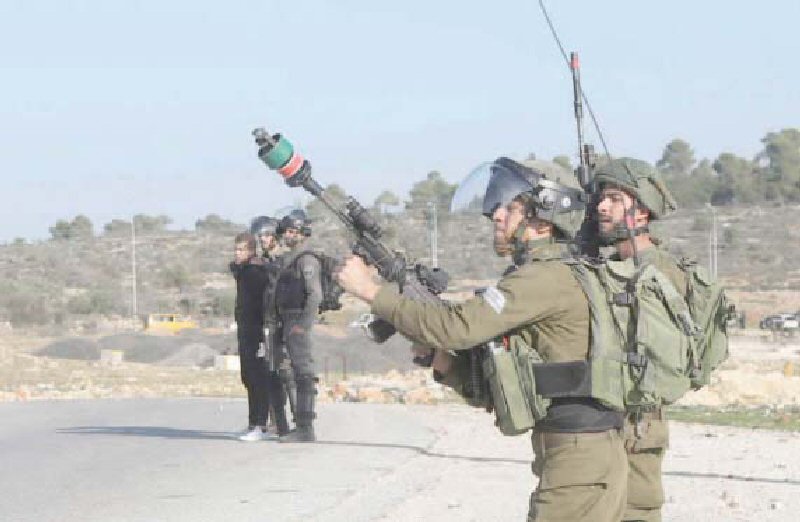 Israeli forces continued with systematic crimes in the occupied Palestinian territory (oPt) for the week of 11 – 17 January, 2018.

During the reporting period, Israeli forces killed 3 Palestinian civilians, including 2 children, in the West Bank and Gaza Strip.  They also wounded 112 Palestinian civilians, including 29 children, 2 journalists and a paramedic, in the West Bank and Gaza Strip.  In the Gaza Strip, the Israeli forces continued to chase Palestinian fishermen in the Gaza Sea and target border areas in addition to targeting tunnels by Israeli warplanes.

In the West Bank, On 11 January 2018, Israeli forces killed ‘Ali Qino (Qadous) (17) from ‘Iraq Burin village, south of Nablus.  The aforementioned child was killed when Israeli soldiers stationed near cement cubes established by Israeli forces in the morning on the main street of the village to close it opened fire at him.  A number of children threw stones from a distance of 150 meters at the Israeli soldiers.  The latter immediately opened fire at them, killing the abovementioned child.  Doctors in Nablus Specialist Hospital where the child was transferred said that the latter was hit with a bullet that entered his forehead and exited the left side, causing skull fracture and brain herniation

On 15 January 2018, in a similar crime, Israeli forces killed Ahmed Salim (24) from Jayous village, northeast of Qaqliliya.  The aforementioned was killed when he was in a peaceful protest against the U.S. President’s Decision to recognize Jerusalem as the capital of Israel daily organized in al-Mentar area near the annexation wall, west of the village.  Eyewitnesses said that the Israeli forces fired more than 20 live bullets in a row from a distance of only 20 meters.

During the reporting period, the West Bank witnessed protests against the U.S. President’s decision to recognize Jerusalem as the capital of Israel and move the U.S. Embassy to Jerusalem. During the protests, the Israeli forces used force against the protesters, and the shooting to disperse the protests resulted in the injury of 30 civilians, including 4 children, 2 journalists and a paramedic.  Four civilians were hit with live bullets, 20 were hit with rubber-coated metal bullets, and 6 were directly hit with tear gas canisters and sound bombs shrapnel.

In the same context, in addition to the abovementioned wounded persons, on 15 January 2018, 7 civilians, including 3 children, were wounded when Israeli forces moved into Burqin village, west of Jenin and a number of Palestinian children and youngsters protested against the soldiers.  On 16 January 2018, Israeli forces wounded a civilian when they moved into Nablus to carry out an arrest campaign and protect hundreds of Israeli settlers who entered the city to perform their Talmudic rituals in “Josef’s Tomb.” On 17 January 2018, 28 civilians, including 12 children, were wounded; 25 were hit with rubber-coated metal bullets and 3 with sound bombs and tear gas canisters.  This happened when Israeli settlers moved into ‘Azoun village, east of Qalqiliya, and civilians confronted them.  Meanwhile, the Israeli soldiers moved into the village amidst intensive firing of sound bombs, tear gas canisters and rubber-coated metal bullets after cutting off the electricity.

In the Gaza Strip, in new crime of using lethal force, Israeli forces stationed along the border fence between the Gaza Strip and Israel, east of al-Bureij refugee camp in the central Gaza Strip killed Amir Abu Musa’ed (15) from al-Musadder village after being shot with a bullet to the chest.  The child was killed when Israeli soldiers opened fire at 20 children and young men who were protesting on Um Hasaniyah Hill area, east of the camp, and throwing stones at the soldiers stationed behind sand barriers.

The border areas with Israel witnessed protests against the U.S. President Donald Trump’s decision to recognize Jerusalem as the capital of Israel and move the U.S. Embassy to it.  During the protests, the Israeli forces used force against the protestors.  Due to opening fire to disperse the protests, 46 civilians were wounded, including 10 children.  Thirty-nine were hit with live bullets, 2 were hit with rubber-coated metal bullets, and 5 were directly with tear gas canisters at their bodies.

As part of the Israeli airstrikes, on 13 January 2018, Israeli warplanes launched 2 missiles at a tunnel near Kerm Abu Salem Crossing in al-Shokah village at the border junction between Egypt, Israel and the Gaza Strip to the southeastern side of Rafah City.  However, no casualties were reported.

As part of targeting fishermen in the sea, on 11 January 2018, Israeli gunboats stationed off al-Sudaniyah Shore, west of Jabalia in the northern Gaza Strip, heavily opened fire at Palestinian fishing boats. The shooting recurred in the above-mentioned area on 13 January 2018.

As part of targeting the border areas, on 11 January 2018, Israeli soldiers opened fire at the agricultural lands, east of Gaza Valley village near the eastern borders of the village.  The shooting recurred in the same area on 13 January 2019.  However, no casualties were reported in both incidents.

Efforts to Create A Jewish majority