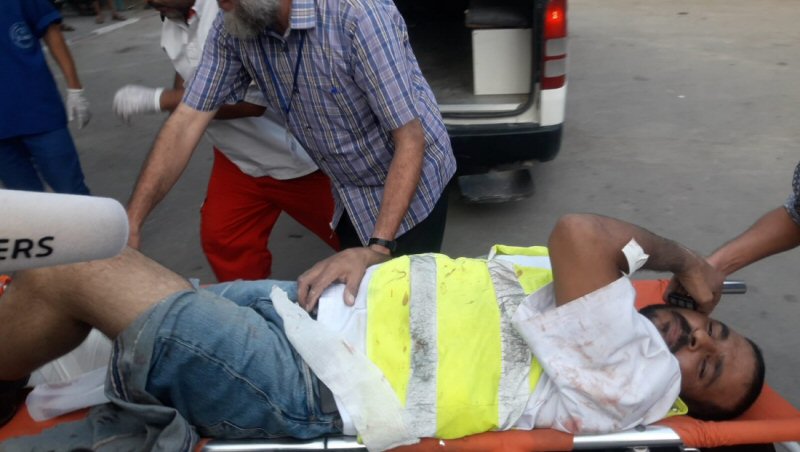 Israeli forces continued with systematic crimes in the occupied Palestinian territory (oPt) for the week of (18 – 24 October, 2018.

Israeli soldiers continued to use excessive force against unarmed civilians and peaceful protestors in the Gaza Strip. A Palestinian youngster was killed in eastern Deir al-Balah, in central Gaza, while
342 civilians, including 60 children, 4 women, 6 journalists and 3 paramedics, were wounded; 14 of them sustained serious wounds.

Israeli forces continued to use lethal force against Palestinian civilians, who participated in peaceful demonstrations organized within the activities of the “Great March of Return and Breaking the Siege” in the Gaza Strip, which witnessed for the 30th week in a row peaceful demonstrations along the eastern and northern Gaza Strip border area. During the reporting period, the Israeli forces killed a Palestinian civilian, and wounded 342 civilians, including 60 children, 4 women, 6 journalists, and 3 paramedics.  The injury of 14 of them was reported serious.  Moreover, 2 civilians were wounded during an Israeli airstrike.  In the West Bank, a Palestinian civilian was killed and 6 Palestinians were wounded by the Israeli forces in separate shooting incidents.

In the Gaza Strip, on 23 October 2018, the Israeli forces killed Montaser al-Baz (18), from al-Nussairat after being with a bullet to the head while participating in the Return and Breaking the Siege.

As part of the use of lethal force against the peaceful protestors along the border fence during the reporting period, Israeli forces wounded 342 civilians, including 60 children, 4 women, 6 journalists and 3 paramedics.  Fourteen of them sustained serious wounds.

As part of targeting Palestinian fishermen in the Gaza Sea, the Israeli forces continued to escalate their attacks against the Palestinian fishermen, pointing out to the ongoing Israeli policy of targeting their livelihoods.  During the reporting period, the Israeli forces opened fire 5 times at the fishermen; 2 incidents in the north-western Beit Lahia; 1 off al-Sudaniyah shore in western Jabalia in the northern Gaza Strip; 1 in al-Sheikh ‘Ejleen, south of Gaza City; Deir al-Balah in the Central Gaza Strip.  As a result of those attacks, 6 fishermen were arrested while 2 boats were confiscated.

As part of the Israeli airstrikes, on 19 October 2018, the Israeli drones launched 2 missiles at a group of Palestinians in an olive field, west of the Return encampment in Khuza’ah, east of Khan Younis.  As a result, 2 civilians were wounded.  On 20 October 2018, an Israeli drone launched a missile at a motorbike “Tok Tok” in eastern al-Fokhari, southeast of Khan Younis in the southern Gaza Strip.  As a result, the motorbike burned but no causalties were reported.  In the 2 incidents, the Spokesperson of the Israeli Forces declared targeting a cell launching incendiary Balloons at the Israeli communities adjacent to the southern Gaza Strip.

On 24 October 2018, Israeli drones launched 2 missiles; only minutes between each, at a border control point belonging to the Palestinian armed Groups in eastern al-Shokah village, east of Rafah City in the southern Gaza Strip. However, no casualties were reported.

In the West Bank, as part of use of lethal force against Palestinian civilians, on 24 October 2018, the Israeli forces killed a Palestinian civilian and wounded 3 others in Tamoun village, southeast of Tubas.  This happened when the Israeli forces moved into the above-mentioned village from all its entrances and patrolled their vehicles.  Thus, dozens of Palestinian youngsters and young men gathered to throw stones and Molotov Cocktails at the Israeli soldiers who then heavily fired live and rubber-coated metal bullets and teargas canisters.

During the reporting period, Israeli forces conducted at least 84 military incursions into Palestinian communities in the West Bank and 6 similar ones into Jerusalem and its suburbs. During those incursions, Israeli forces arrested at least 35 Palestinians, including 8 children, in the West Bank.  Meanwhile, 12 other civilians, including 2 children, were arrested in Jerusalem and its suburbs. Among those arrested in Jerusalem was the Governor of Jerusalem, ‘Adnan Gheith, and Director of the Palestinian Intelligence Service in Jerusalem, Colonel Jihad al-Faqih, who were both arrested on 20 October 2018 and released on 22 October 2018.

As part of the Israeli house demolitions and notices, on 21 October 2018, the Israeli forces handed 3 civilians from al-Waljah village, west of Bethlehem, notices to stop the construction works in their houses in Khelet al-Samak and al-Thaher areas under the pretext of building without a license.  It should be noted that an Israeli force accompanied with Jerusalem Municipal staffs moved into “‘Ein Jweizah” area, northwest of the village on 18 October 2018 and handed Najlaa’ Abu al-Haiijaa’ a notice to demolish her inhabited house which is 120 square meters.  Moreover, they handed ‘Alaa’ Salim Abu Rezeq a decision to destroy retaining walls.

As part of the attacks on the holy sites, on Wednesday morning 24 October 2018, the Israeli forces suppressed a sit-in organized upon calls from Coptic Bishop Anba Antonius in front of Deir al-Sultan Monastery next to the Church of the Holy Sepulchre in occupied East Jerusalem’s Old City to protest the Israeli-led restoration works at the site which they say favour Ethiopian monks living in the monastery and arrested a monk.

As part of demolition of houses and other civil objects, on 18 October 2018, the Israeli forces demolished a 4-storey building in the Tall Mount Area, east of al-Bireh under the pretext of un-licensed building.  The building was established on area of 145 square meters and belonged to Khamis Jamil ‘Abed Matariyah.

On the same day, the Israeli forces demolished an agricultural shed in Kherebet al-Marajem, east of Doma village, southeast of Nablus.  The shed was built of bricks and roofed with tin plates on an area of 60 square meters.  It belonged to Musalam Ma’rouf Musalam and used for agricultural purposes.

On 22 October 2018, the Israeli forces demolished 3 water wells and levelled 15 dunums; part of which were planted with olive trees in Kherebet Jamrourah, west of Tarqoumia village, west of Hebron.

On 23 October 2018, the Israeli forces dismantled 2 mobile houses in Bazeeq area in the northern Jordan Valleys, east of Tubas and confiscated them.  The houses are used as 2 rooms for the school principle and staff in al-Tahadi 10 School.  The Principle was also handed a demolition notice for the school and another for confiscation of school contents in addition to a third notice to suspend classes in the Abovementioned School.

As part of the Israeli settlers’ attacks against the Palestinians civilians and their property, on 18 October 2018, a group of settlers under the protection of the Israeli forces attacked al-Safafir area, east of ‘Orif village, south of Nablus.  On 20 October 2018, another group under the protection of the forces attacked Khelet Abu al-‘Aqareb area, east of Burin village, south of the city.  The settlers threw stones at a house belonging to Bashir al-Zeben and removed the iron fencing established around the house outside fence to protect them from the settlers’ attacks.  Due to the attack, the windshield of the car belonging to the coordinator of the Popular Committee against the Wall was broken.

On 22 October 2018, a group of settlers attacked Marda village, north of Salfit, and punctured tires of 7 cars parked in front of the houses.

The wounded journalists were identified as:

The Monastery of the Sultan is an ancient monastery of the Orthodox Copts located inside the walls of the Old City of Jerusalem in the Christian neighborhood next to the Church of St. Helena, the Church of the Angel and the passage from the Church of Helena to the Wall of Sepulcher Church and built on an area of 1800 square meters.