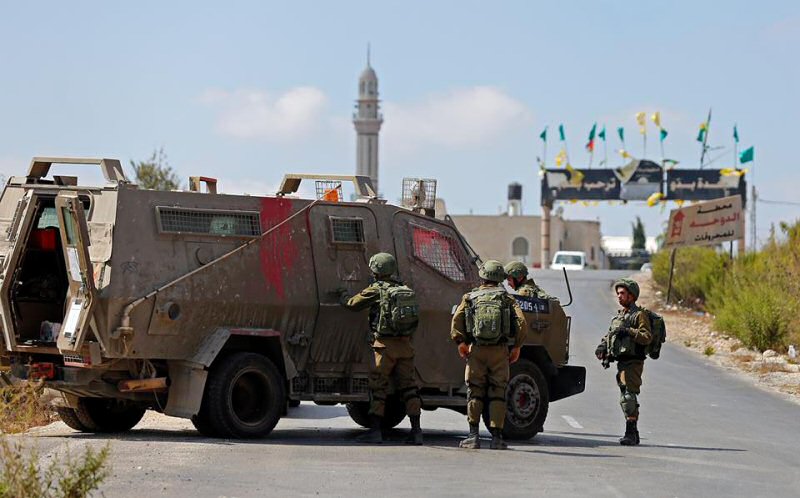 Israeli forces continued with systematic crimes in the occupied Palestinian territory (oPt), for the week of 20 – 27 September, 2017.

An armed Palestinian was killed at the entrance to “Har Adar” settlement, northwest of Jerusalem, a Palestinian civilian wounded during Kafr Qaddoum weekly protest, northeast of Qalqilia, while Israeli forces conducted 85 incursions into Palestinian communities in the West Bank and a limited one into the Southern Gaza Strip.

During the reporting period, on 26 September 2017, Israeli forces killed Nemer Mahmoud Jamal (37) from Beit Sorik village, northwest of occupied Jerusalem when 4 Israeli Border Guard officers at the entrance to “Har Adar” settlement opened fire at him.  Moreover, three Israeli soldiers were killed and the fourth was wounded.

On 22 September 2017, Israeli forces wounded a Palestinian civilian with a rubber-coated metal bullet when they opened fire at dozens of Palestinians and international activist during Kafr Qaddoum weekly protest, northeast of Qalqiliya.

On 24 Septmber 2017, Israeli gunboats sporadically opened fire at the Palestinian fishing boats, west of al-Soudaniya , wwest of Jabalia in the northern Gaza Strip, and chased them.  The gunboats recurred the same shooting twice on 26 Stpember while no casualties were reported in all the incidents. However, the fisehrmen were forced to flee for fear of being wounded, arrested or their boats being damaged.

During the reporting period, Israeli forces conducted at least 85 military incursions into Palestinian communities in the West Bank. During these incursions, Israeli forces arrested at least 75 Palestinian civilians, including 12 children. Among those arrested during this week was journalist ‘Abdel Rahman ‘Awad, Reporter of Safa News Agency in Ramallah and al-Bireh.  He was arrested from his family house in Burdus village, west of Ramallah, and Raghid Tabasiyah (26), who is also a photojournalist at Annajah Satallite Channel in Nablus, was arrested as well from his family house in Qalqiliya.  The Israeli forces also arrested ‘Alaa’ Badarnah, a photojournalist at the Gemran News Agency while covering the weekly protest in the Northern Jordan Valley and took him to “Samra” settlement.  After two hours, he was released.

Following the armed attack at the entrance to “Har Adar”  settlement, northwest of Jerusalem, on 26 September 2017, the Israeli Prime Ministerm Benyamin Netanyahu, threated, “the Attacker’s house would be demolished and Israeli work permits withdrawn from his extended family.” As soon as the attacker was identified, the Israeli forces declared Beit Sorik village, where the attacker lived, as a closed military zone and imposed a tightened cordon on it.  Israeli forces also prevented any vehicle, civilian, ambulances and jouralists from entering or leaving the village.  They also closed the Tunnel Road, which is the only one connecting the villages of Northwest Jerusalem and its surroundings.  The cordon has not been so far lifted.

As part of house demolitions, on 25 September 2017, Israeli forces demolished a workshop for stone manufacturing in Beit Za’tah area, east of Beit Ummar village, north of Hebron, under the pretext of building without a license in Area (C) according to the 1993 Oslo Accords.  The workshop which built of tin plates and bricks on an area of 150 square meters belongs to Zamel Hamad Abu Mariah (45).

On the same day, Israeli forces demolished a car wash and two barracks for grazing sheep in Bab al-Marj area at the western entrance to Deir Balut village, west of Salfit, for the same abovementioned pretext.

On 07 September 2017, agroup of settlers from “Rahlim” settlement established on the lands of Yitma and al-Sawiyah villages, south of Nablus, cut down 43 olive trees with automatic saws.  Those trees belong to Gom’ah ‘Aadi from al-Sawiyah.

After identifying the attacker, Nemer Mahmoud al-Jamal (37), Israeli forces announced that Beit Surik village, northwest of occupied Jerusalem, is a closed military zone and imposed a tight closure on it. The Israeli forces also closed main and sub roads leading to the village and established checkpoints at the entrances to the village. They also banned any vehicle or civilian from entering or leaving the village. Moreover, they banned the ambulances and journalists from entering the village. Furthermore, the Israeli forces closed the Tunnel Road, which is the only road that connects the villages in the northwest of Jerusalem with its surroundings.  Those villages are Qatannah, Beit ‘Anan, Beit Surik, Beit Eksa, Badou, al-Qabibah, Beit Ejza, Beit Daqou and Kharb al-Lahem villages, which are all inhabited by 60, 000 civilians. In the evening hours, the Israeli forces detained dozens of cars at the Tunnel entrance to theses villages. They only allowed limited number of cars to pass after subjecting them to precise and long search.