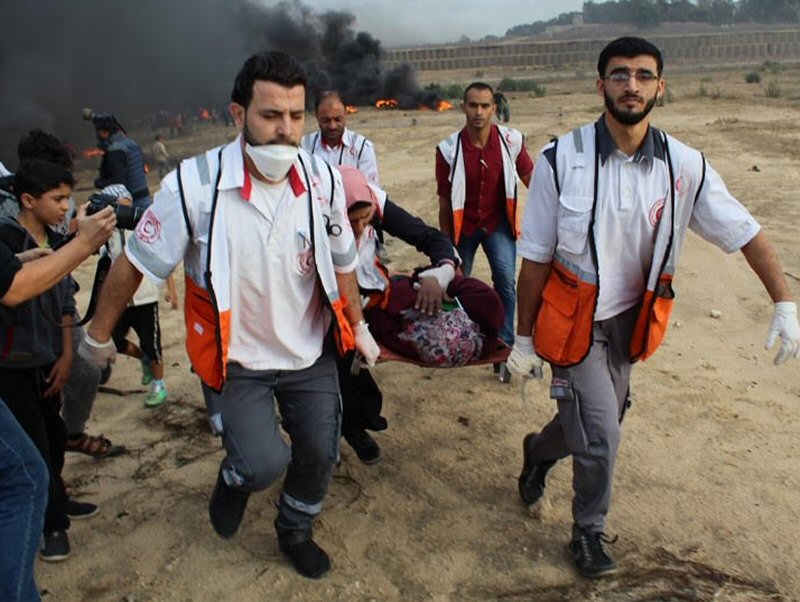 Israeli forces continued with systematic crimes, in the occupied Palestinian territory (oPt), for the week of 18 – 24 October, 2018.

Israeli forces continued to use excessive force against unarmed civilians and peaceful protestors in the Gaza Strip. 7 Palestinian civilians were killed in the 31st week of the Return and Breaking Siege March. 298 civilians, including 68 children, 13 women, 3 journalists and 9 paramedics, were wounded; 14 of them sustained serious wounds.

During the reporting period, the Israeli forces escalated their murders as 11 palestinian civilians were killed, including 3 children.

In the Gaza Strip, the Israeli forces killed 10, including 3 children.  Seven of those killed due to the use of lethal force against Palestinian protesters, who participated in peaceful demonstrations organized within the activities of the “Great March of Return and Breaking the Siege” in the Gaza Strip, which witnessed for the 31st week in a row peaceful demonstrations along the eastern and northern Gaza Strip border area. Meanwhile, the 2 children were killed in an airstrike carried out by the Israeli warplanes in violation of the principles of necessity and distinction.  During the Protests in the Gaza Strip, the Israeli forces wounded 289 civilians, including 68 children, 13 women, 3 journalists, and 9 paramedics.  The injury of 14 of them was reported serious while a civilian was wounded during a shooting incident near the border area.

In the West Bank, the Israeli forces killed a Palestinian civilian and wounded 16 others, including a child, journalist and 2 paramedics.

In the Gaza Strip, on 26 October 2018, Israeli forces killed 4 protestors; 3 in eastern Khan Younis and 1 in northern Gaza Strip, during their participation in the 31st Friday Protests within the Great March of Return and Breaking the Siege.  In the next two days, 2 of those wounded on Friday succumbed to their wounds.  On 29 October 2018, a protester was killed while participating in the protests occurred off Zikim Military Base, northwest of Beit Lahia in the northern Gaza, increasing the number of those killed in protests to 7.

in a new crime of excessive use of lethal force, which reflect the highest degree of recklessness of the lives of Palestinian civilians, Israeli forces killed 3 Palestinian children after targeting them with a missile in the border fence area with Israel, east of Wadi al-Salqa village, in the central Gaza Strip. Investigations conducted by the Palestinian Center for Human rights (PCHR), indicate that the airstrike violates the principles of necessity and discrimination and the use of force was excessive, especially that the 3 children were civilians and unarmed. The Israeli forces claimed that placed an explosive device near the border fence, but paramedics at Palestine Red Crescent Society (PRCS), who retrieved the dead bodies of the 3 children confirmed that the children did not have anything and they found them on the border fence in the Palestinian side.

As part of using excessive forces against the peaceful protests along the Gaza Strip borders, the Israeli forces during the reporting period wounded 298 civilians, including 68 children, 13 women, journalists and 9 paramedics.  Fourteen of those wounded sustained serious injuries.

As part of the Israeli airstrikes, the Israeli warplanes carried out dozens of airstrikes targeting military training sites belonging to the Palestinian Armed Groups and other targets, causing complete destruction of them.  Moreover, the nearby houses and civil objects sustained damage such as the Indonesian Hospital, Golden Hall for Weddings, al-Nawras Resort in Beit Lahia, al-Tawil Company for Auto Repair and Kuhail Contracting Company.  In addition, al-Kamal Building comprised of 4 floors and built on an area of 250 square meters was destroyed in central Gaza City while classes were suspended in Ibn al-Nafis Primary School in Bani Suhaila.

As part of targeting the border areas, on 28 October 2018, the Israeli forces stationed along the border fence between the Gaza Strip and Israel, southeast of Beit Hanoun opened fire at a group of bird hunters, wounding one of them with a bullet to the buttock.

In the West Bank, on 26 October 2018, the Israeli forces killed Othman Ladawdah (34) during his participation in a demonstration comprised of 250 civilians from the Western Farm Village, northwest of Ramallah in Kherbet Na’lan area which Israeli settlers from Kirim ‘Alim storm every Friday to perform Talmudic prayers in an attempt to seize it.

During the reporting period, the Israeli forces wounded 16 Palestinian civilians, including a journalist and 2 paramedics.

During the reporting period, Israeli forces conducted at least 55 military incursions into Palestinian communities in the West Bank and 6 similar ones into Jerusalem and its suburbs. During those incursions, Israeli forces arrested at least 49 Palestinians, including 5 children, in the West Bank.  Meanwhile, 12 other civilians, including 3 children, were arrested in Jerusalem and its suburbs.

As part of the Israeli house demolitions and notices, on 29 October 2018, the Israeli forces demolished a newly built house in al-Fheidat neighbourhood in ‘Anata village, northeast of occupied Jerusalem, belonging to Saleh Fheidat.  The 50-square-meter house that is of one floor sheltered a family of 5.  It should be mentioned that the Israeli municipality demolished another house, which was built 80 years ago, 2 months ago.  Fheidat said that he was not warned or noticed that his newly built house would be demolished by the municipality and that the demolition was surprisingly carried out.

Moreover, on 28 October 2018, the Israeli municipality handed 3 civilians from al-Waljah village, northwest of Bethlehem, notices to refer to it for investigating “violations committed relevant to unlicensed construction”, noting these houses were demolished a month ago.

As part of demolition of houses and other civil objects, on 29 October 2018, the Israeli forces levelled 23 dunums and property belonging to civilians in western Beit Oula village, west of Hebron.

As part of the Israeli settlers’ attacks against the Palestinians civilians and their property, on 28 October 2018, the guard of “Eili” settlement namely Yousi attacked the Secretary of Qaryout village council, Mofid Jamil Abu Murrah (56), and Member of the village council, Khairy Mohammed Hasan Marawdah (53) on Batishah Road, west of the abovementioned village, southeast of Nablus.  Both of them were in Batishah area within Area B supervising the establishment of the base course within a project funded by the First Aid Society.  The guard beat them up and threw a sound bomb at the bulldozer that was spreading the base course and belonging to the village council.

Moreover, 52 civilians, including 10 children, a woman and a journalist, were wounded. Forty four of them were hit with live bullets and their shrapneland8 were hit with tear gas canisters. Doctors classified 3 civilian’s injuries as serious.

The wounded paramedics were identified as:

It should be noted that the 3 paramedics worked at the Union of Health work Committee.

Meanwhile, Israeli soldiers stationed behind sand barriers and cement cubes heavily opened fire and fried a large number of tear gas canisters at Palestinian civilians participating in the demonstration and approached the coastline. As a result, Mahmoud Abdul Hai Ahmed Abu ‘Obadi (25), from al-Shati’a refugee camp, west of Gaza Strip, was killed after being hit with a live bullet to the chest.

The Israeli soldiers also wounded 34 civilians, including 9 children, a woman and 3 paramedics. The injuries were classified as follows:

Sixteen civilians, including 2 children, a woman and 2 PRCS paramedics, were hit with live bullets and their shrapnel. The paramedics were identified as Suleiman Mohammed Salman al-Zawa’ah (30) was hit a live bullet to the right leg and Hani Mahmoud Husein Wadi (33) was hit with a shrapnel to the chest.