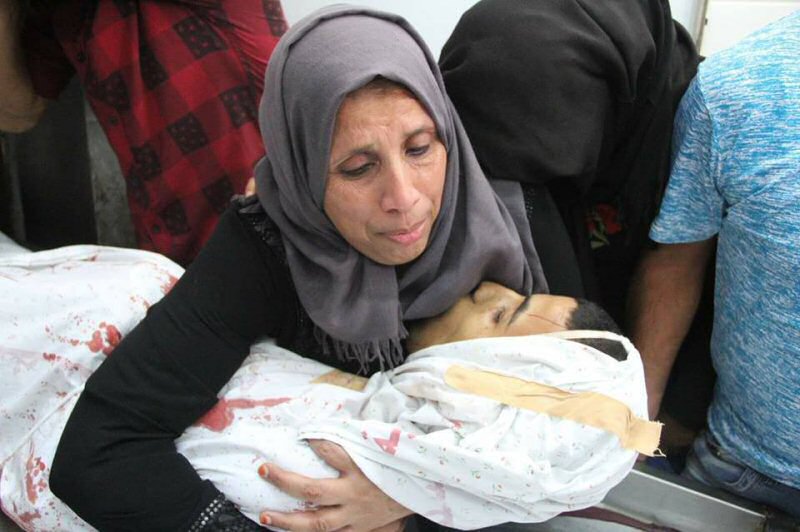 Israeli forces continued with systematic crimes in the occupied Palestinian territory (oPt) for the week of 27 July – 02 August 2017.

In the West Bank, on 28 July 2017, Israeli forces killed Abdullah Taqatqa (24), from Marah Ma’ala, south of Bethlehem. The aforementioned person was killed when Israeli fo rces opened fire at him while walking on Beit Fajjar-Bethlehem road leading to “Gosh Etzion” settlement, south of the city. They claimed he attempted to stab Israeli soldiers.

In the same context, on 27 July 2017, medical sources at Palestine Medical Complex in Ramallah pronounced Mohammed Kan’an (26), from Hezma village, northeast of occupied Jerusalem, dead succumbing to wounds he sustained during clashes with Israeli forces. According to PCHR’s investigations, the aforementioned person was wounded on 24 July 2017, when Israeli forces moved into Hezma village.

During the reporting period, Israeli forces wounded 28 Palestinian civilians, including 4 children and a photojournalist; 16 were wounded in occupied Jerusalem, while the 12 others were wounded in the West Bank.  Six of them were hit with live bullets while 22 were hit with rubber-coated metal bullets.

In the Gaza Strip, on 28 July 2017, Israeli forces killed Abdul Rahman Abu Hmaisa (16), when they opened fire at dozens of youngsters protesting against the Israeli practices in al-Aqsa Mosque near the border fence between the Gaza Strip and Israel, east of al-Bureij refugee camp in the central Gaza Strip.

In the same context, the border areas witnessed protests against the Israeli closure imposed on Gaza. The Israeli forces used force against the protestors. As a result, 10 Palestinians, including 2 children and a paramedic, were wounded. Three of them were hit with live bullets and 7 others were hit with tear gas canisters and sound bombs.

Concerning attacks on fishermen, on 27 July 2017, Israeli gunboats sporadically opened fire at the Palestinian fishermen, northwest of Beit Lahia village, north of the Gaza Strip, and chased them. Similar attacks recurred against the Palestinian fishing boats in the same area on 30 and 31 July and 01 and 02 August 2017. Moreover, the Israeli gunboats opened fire at Palestinian fishing boats off al-Sudaniya shore, north of the Gaza Strip, on 28 July and 02 August 2017. However, neither casualties nor material damage were reported in all of the abovementioned incidents. It should be noted that the fishing boats were sailing within 3-5 nautical miles.

During the reporting period, Israeli forces conducted at least 66 military incursions into Palestinian communities in the West Bank, and 7 ones in Jerusalem. During these incursions, Israeli forces arrested at least 83 Palestinian civilians, including 13 children. Forty-one of them, including 11 children, were arrested in occupied Jerusalem and its suburbs. Furthermore, 123 civilians, who were present in al-Aqsa Mosque on Thursday, 27 July 2017, were arrested and then taken to al-Massqoubiya interrogation facility. Among those arrested was PLC Member of the Change and Reform Bloc (Hamas), Hosni al-Borini, who was arrested from his house in northern Asirah village, north of Nablus.

During the reporting period, on 29 July 2017, Israeli forces raided Palmedia Media Services’ head office in Ramallah. They damaged the doors and covered the surveillance cameras with adhesive tapes. It should be noted that company offers media services to a number of Arab and international satellite channels, including al-Quds, BBC, France 24 and RT.

Although the metal detectors, stands and railings were removed from the entrances of al-Aqsa Mosque in occupied Jerusalem, the Israeli authorities continued imposing restrictions on the Muslim worshippers. On 27 July 2017, after tens of thousands of worshippers entered the Mosque, Israeli forces stormed it while opening fire. They wounded 16 Palestinians with live and rubber-coated metal bullets. Besides, dozens sustained bruises as they were beaten up. Israeli forces arrested over 123 civilians, who were inside the Mosque, and took them to al-Masqoubiya interrogation facility. On Friday, 28 July 2017, the Israeli authorities announced banning males below 50 from entering the Old City. They also deployed a big number of Israeli officers in the streets and at al-Aqsa gates while blocked some streets with metal barriers.

In the context of demolition notices, on 02 August 2017, the Israeli authorities sent 13 demolition notices against buildings, including 9 houses in Ein al-Jwaiza area in al-Walaja village, west of Bethlehem, under the pretext of non-licensing. It should be noted that Ein al-Jwaiza area is located within the boundaries of the Israeli municipality in Jerusalem and its inhabitants pay the property tax “Arnona” although they do not hold a Jerusalemite ID.

Concerning settlers attacks against the Palestinian civilians and their property, hundreds of settlers stormed al-Aqsa Mosque on the anniversary of the so-called “Temple Destruction”. On 01 August 2017, 722 of them stormed the Mosque while 1,097 others stormed it on 02 August according to the Islamic Endowments (Awqaf) Department in Jerusalem.

On 31 July 2017, the Israeli forces levelled a 500-square-meter plot of land in Mothallath Kharsa, south of Doura, southwest of Hebron in order to establish a military watchtower.

One of the wounded civilians said to PCHR’s fieldworker:

“Some young men and I approached about 50 meters away from the border fence where a number of the soldiers were lying down on two sand hills. We threw stones at them and they fired tear gas canisters at us, so we returned and then a number of the young men again approached the abovementioned border fence. At approximately 03:30, the soldiers fired live bullets at us. After an hour and a half, I knew that there was a wounded person bleeding. I moved forward and a child followed me. I then saw Abdul Rahman Abu Hamisah lying on the ground and putting his hand on his chest as he was bleeding. After the Israeli soldiers opened fire at us, the child, who was with me, was wounded and fell to the ground. I attempted to pull Abu Hamisah, but the soldiers opened fire at us again. I felt pain in my right thigh and fell to the ground. Ten minutes later, 3 young men came and carried Abu Hamisah, who was dying, and others carried the fainted child, who was with me. Moreover, 2 other young men came and took me by a motorcycle and drove for about 300 meters. After that, we saw an ambulance of the Palestine Red Crescent Society (PRCS), which took me to al-Aqsa Hospital in Deir al-Balah.”