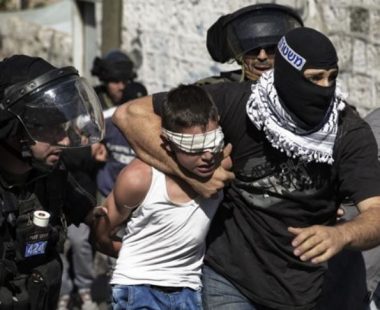 The lawyer of the prisoners and ex-prisoners’ commission, Loay Akeh, revealed the testimony of the Mohammed Shamasneh, aged 18, from the town of Qutneh in Jerusalem, where he recounts the harsh interrogation, assaults and beatings he was subjected to by the Israeli Prison Service.

Shamasneh explained to the lawyers, according to Al Ray Palestinian Media Agency, that he was arrested on 4/4/2017, after Israeli occupation forces raided his house and took him to a nearby military checkpoint.

He said that soldiers did not stop beating him and hitting him with their rifle butts on various parts of his body.

Shamasneh stated that he was taken to Afula hospital for treatment, after he suffered fractures and injuries in his body, and was later taken to the Maskoubiya detention center for interrogation.

He reported that during his 32-day stay at the Muskubiya interrogation center, his health condition worsened as a result of injuries sustained, as well as being held in narrow, dark cells, causing respiratory failure.