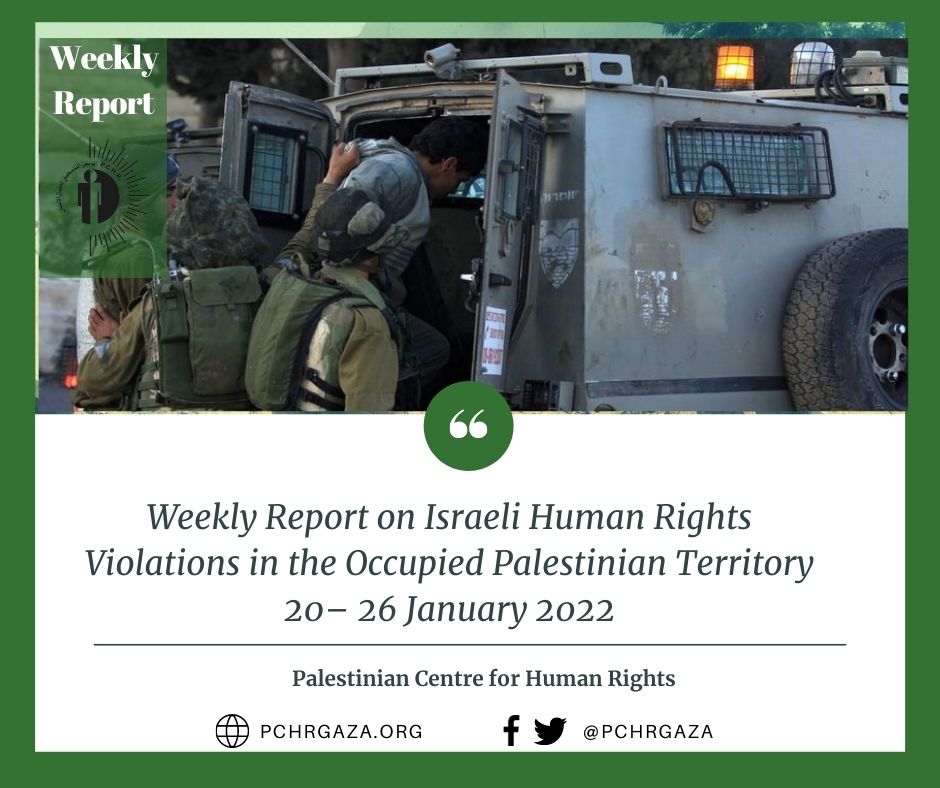 Israeli occupation forces (IOF) continued to commit crimes and multi-layered violations against Palestinian civilians and their properties in the occupied Palestinian territory (OPT). Meanwhile, the Gaza Strip is in its 15th year under closure as a measure of collective punishment, in breach of all international laws, exacerbating the humanitarian hardships across the territory.

On Wednesday, 26 January 2022, Jamil al-Tamimi (63) from Jerusalem who was arrested on civilian grounds and had Schizophrenia, died in the Israeli Nitzan Prison. According to the Israeli Prison Service, al-Tamimi was found unconscious and without pulse lying on the ground.

In the Gaza Strip, IOF opened fire at agricultural lands on 9 different incidents and once against fishing boats.

IOF carried out 122 incursions into the West Bank, including occupied East Jerusalem. Those incursions included raids of civilian houses and shootings, enticing fear and havoc, and attacking many of them. During this week’s incursions, 66 Palestinians were arrested, including 5 children.

In the Gaza Strip, IOF arrested two Palestinians attempting to cross east of the border.

The Israeli occupation authorities continued its collective punishment measures against the Gaza Strip as the 15-year Israeli closure imposed on the territory deepened the population’s humanitarian and living crises, with unemployment skyrocketing at 45%, i.e. 217,000 able workers are unemployed, 63% of whom are youth.

Settlement Expansion and settler violence in the West Bank