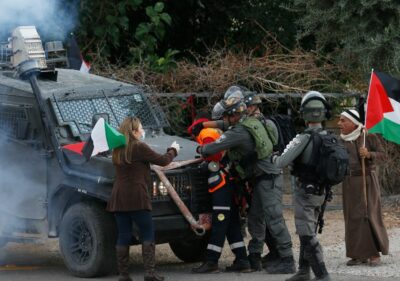 Israeli occupation forces (IOF) continued to commit crimes and multi-layered violations against Palestinian civilians and their properties, including raids into Palestinian cities that are characterized with excessive use of force, assault, abuse and attacks on civilians. This week witnessed an increase in home demolitions as well as demolition, cease-construction, and property seizure notices that were issued against Palestinians’ properties. Additionally, settler-attacks were on the rise this week. IOF raided an ambulance and arrested a paramedic in a separate incident while assisting a wounded person, which fall under IOF’s continued attacks against medical crews who are protected under international law.

This week, the Palestinian Centre for Human Rights (PCHR) documented 191 violations of international human rights law and international humanitarian law (IHL) by IOF and settlers in the oPt. It should be noted that the limitations due to the corona virus pandemic, has limited PCHR’s fieldworkers mobility and ability to conduct field documentation; therefore, the information contained in this report are only part of the continued IOF violations.

IOF killed Nour Jamal Shuqair (36) on 25 November 2020, while crossing a-Za’ayem military checkpoint, eastern east Jerusalem, for an alleged car-ramming attack. Seven other Palestinian civilians, including a child, sustained wounds in IOF excessive use of force in the West Bank: 2 in IOF suppression of two separate protests in Ramallah; another was wounded at Kufur Qaddoum’s weekly protest against settlement expansion activities; a child wounded in Hebron; and 3 others sustained wounds during a protest against settlements by Tayasir/The Jordan Valley checkpoint.

IOF carried out 94 incursions into the occupied West Bank. Those incursions included raids of civilian houses and shootings, inciting fear among civilians, and attacking many of them. During this week’s incursions, 72 Palestinians were arrested, including 6 children and a woman.

Ramallah: agricultural lands razed, and a barracks and a shop demolished.

Hebron: 9 small dwellings, rooms and lavatories demolished, a pipeline (1.5 km) confiscated, and 1 house and foundations of another demolished.

Jericho: a residential caravan confiscated, a tent used for cattle uprooted, and
3 houses and several barracks were demolished.

– A house assaulted in Jenin; lands razed and two civilians assaulted in Bethlehem,
– an assault attempt targeted a house in Hebron,
– a child was kidnapped in Nablus,
– several civilians were assaulted in Qalqilia and Salfit, and
– 45 olive trees were uprooted in Salfit.

“while covering the clashes in the northern Jordan valleys, a civilian from Tayasir village sustained wounds in the abdomen; as we transported him to the ambulance, several soldiers including an officer attacked the ambulance. One of them stopped before the driver and others stepped into the vehicle and attempted to arrest the wounded civilian; the paramedic intervened and informed the soldiers that the victim had epilepsy. The soldiers let him go and allowed us to transport him to the hospital.”
– PRCS volunteer, Maisam Sawafteh to PCHR fieldworker

“At approximately 21:00, I heard knocks on my door, so I headed to open it. As soon as I did, a group of Israeli soldiers stormed the house and detained me, along with my wife and children in one room and started searching the house for 10 minutes, then left. At approximately 22:00, the Israeli soldiers returned to my house, detained us all in the same room and started searching the house all over again. One of the soldiers attempted to confiscate the surveillance cameras’ recording device, but I intervened and argued with them, then they withdrew”.
– Ra’ed Abu Rmeila told PCHR’s fieldworker

At approximately 11:00, IOF moved into Jit village, northeast of Qalqilya, and stormed Jit High School and searched several classrooms claiming that a group of the students from the adjacent elementary school threw stones at a settler and flee to the high school.

“During the fifth period, I was surprised to see a settler trying to ram into the school with his car, I attempted to prevent him, but he told me that a group of children threw stones at him and he wanted to catch them. I attempted to convince him that they are only children at play, and they were playing and throwing small stones at each other and that he was not targeted by them, as both the element and secondary schools where located near “Kedumim” settlement and no Palestinian houses or civilians were in the area. He eventually left. A little while later, the Kedumim settlement’s security guards came along with an Israeli military force and stormed the school and entered the classrooms in the ground floor. I immediately ordered all the teachers on the top floors to close the classrooms. Nonetheless, the force attempted to go upstairs and arrest the students, but I prevented them and told them that I just want peace and I will not let the students throw stones or provoke problems in this area. I told them that I informed the liaison and the Ministry of Education; an officer responded that he is in charge of assessing the situation in the field. I tried my best to stop them from going to the classes on the top floors; and the officer told me that they would only withdraw if I pledge not to let this incident happen again. I did, and they withdrew a while later. The teaching staff and the students were terrified during the raid, as our school is located in a highly tense area near the settlement. We are not allowed to raise any flags within the school and are under constant threats; nonetheless, the school is a symbol of Palestinians’ resilience and persistence in the area.”
– Basel Shawahneh, Principle of Jit High School, told PCHR’s fieldworker

“While I was sleeping in our house in Awarta village, southeast of Nablus, I heard a quarrel between my brothers Hamdi (25) and Izz al-Dein (17), and Israeli soldiers who were looking for Majdi. When I intervened, they started beating all of us with their riffles’ butts so they hit me in my head and face until blood covered my whole face, then they handcuffed and blindfolded me and put me in one of their vehicles and took me to Huwara military camp. I was untied in military the camp and taken to an investigation room for interrogation about the incident. While I was being interrogated, they brought my brother, Majdi, so I had the chance to see and talk to him before they took him to another room. An hour and a half later, they ordered me to wash my face and then transferred me with their vehicles to the entrance of the village and kept Majdi under arrest. As soon as I arrived to my house, my family took me to Rafidia Governmental Hospital in Nablus where I was diagnosed with skull fracture and deep wounds in the head that took five stitches, and they kept me under 24 hours observation, before they allowed me to check out the next day”.
– Mohammed Jalal Qawariq told PCHR’s fieldworker

III. Settlement Expansion and Settler Violence in the West Bank
a. Demolition and Confiscation of Civilian Property

At approximately 09:00 on Wednesday, 25 November 2020, IOF backed by several military construction vehicles and accompanied with 2 Civil Administration vehicles, a bulldozer, and a digger stormed Masafer area in Yatta, south of Hebron. The bulldozers demolished 9 small structures, including rooms and lavatories under the pretext of illegal construction in Area (C).

The demolition process was as follows:

Tayseer Ahmed Mosalm / Sawarkah / Residential structure built of bricks on an area of 150sqm and inhabited with 4 individuals, including 2 children.

Ibrahim Salama Khalil / Obaiyat / A barrack built of steel pillars and bricks on an area of 100sqm as it was divided to two sections; the first was used for grazing sheep and the second was used for storing animal feed.

Dawoud Salama Khalil/ Obaiyat / A barrack built of steel pillars and bricks on an area of 100sqm as it was divided for two sections; the first was used for grazing sheep and the second was used for storing animal food. It should be noted that Ibrahim Obaiyat and his brother Salama have 2 daughters with disabilities.

At approximately 11:30 on Monday, 23 November 2020, a group of Israeli settlers, from Yitzhar
Street linking between Nablus and Qalqilia, attacked Tareq Ma’zouz Mohammed Hantash (19),
from Baqat al-Hatab village, east of Qalqilia, while he was heading from Tulkarm to Jamma’in
village as he works as salesman. The windshield of Hantsh’s vehicle was smashed and the front
doors were damaged as settlers attempted to reach him, but he managed to drive away from the
area.

“At approximately 11:30, I was driving my vehicle on “Yitzhar Street and heading to work in the morning. There was a long line of vehicles on the street due to an accident. I saw my colleague, who is also a salesman, as he was skipping the vehicles line. I called him to inform him that I was on the same street behind the line, so he told me to flee from the area for Israeli settlers are throwing stones at vehicles. Accordingly, I attempted to turn back, but was surprised by a settlers’ bus approaching me. Settlers stepped out of the bus and attempted to open the doors to my vehicle, but I locked them, so they threw large rocks at the vehicle, breaking the windshield in an attempt to reach and attack me. I finally managed to flee from the area and returned to my place in the line. Fixing the vehicle’s windshield cost me about NIS 550, but I did not fix the doors yet.”
– Tareq told PCHR’s fieldworker

“I was heading to Al-Funduq village, east of Qalqilia, and stopped at the stop sign at Jinsafut village square, a black vehicle stopped next to mines as a I heard a sound, so I looked at the vehicle. There was a religious settler with braids and wearing a hat in addition to 2 settlers. He started insulting me in Hebrew. I asked him if he was a policeman and he replied: “I will show you who I am. The settler took out something like a weapon and began spraying something on me. I looked at my hands and eye and saw blood. I was frightened and said to the young man who was next to me that I am dying. Later, the young men told me not to be afraid because this was gas. An Israeli force arrived at the area and questioned us. I told them that: “the place is full of cameras and you can see everything that happened to me.” I was taken to Darwish Nazal Hospital in Qalqilia for medical treatment.”
– Wa’el told PCHR’s fieldworker