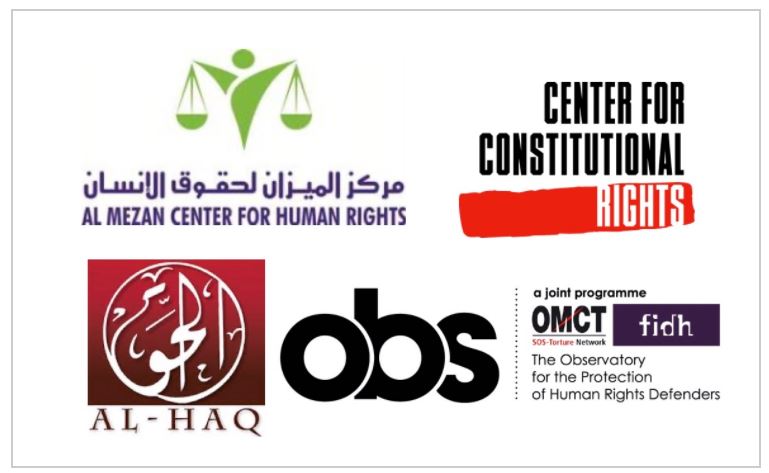 Al-Mezan Center For Human Rights: Paris-Geneva, 26 November 2020 – The United States (US) Secretary of State announced on 19 November, that the US State Department would designate as “anti-Semitic” organisations that engage in peaceful means to end human rights violations against Palestinians, including boycotts, and would deem such organisations ineligible for government funding. The Observatory for the Protection of Human Rights Defenders (FIDH-OMCT), the Center for Constitutional Rights (CCR), Al-Haq and Al Mezan Center for Human Rights denounce the dangerous, defamatory false-equivalence of peaceful advocacy for the realisation of Palestinian self-determination and other human rights with antisemitism, and call on the US State Department to reverse this policy and refrain from making such allegations against human rights organisations and the Palestinian rights movement more broadly.

International human rights organisations along with smaller organisations advocating for the rights of Palestinians, long targeted by pro-Israel groups, are now in the crosshairs of the U.S. State Department because of their advocacy supporting or participating in the Boycott, Divestment and Sanctions (BDS) movement, including support for the United Nations’ database of companies that do business with Israeli settlements in the occupied West Bank. Far from seeking to combat real instances of antisemitism, the targeting of groups advocating for Palestinian rights is part of a series of decisions by the Trump administration to silence human rights advocates in the US and abroad, and could have far-reaching consequences in other countries who could follow suit.

The human rights organisations believed to be targeted by slanderous antisemitism accusations use peaceful means to denounce violations and abuses by governments – not only those of Israel – backed by facts, testimonies and within the parameters of internationally accepted mechanisms. This action by the US State Department constitutes a clear attack on the universality of human rights, by restricting the freedom of expression of renowned human rights organisations and human rights defenders working to hold Israel accountable for its continuous violations of core tenets of international law.

This latest step follows earlier actions such as Trump’s misguided Executive Order on anti-Semitism, based on the International Holocaust Remembrance Alliance’s (IHRA) working definition of anti-Semitism  – which seeks to suppress activism and public speech promoting Palestinian freedoms and rights as well as critical assessments of Israel’s policies – and the State Department’s adoption in 2016 of the IHRA’s working definition, which has been criticised by Palestinian rights organisations as politicised and inaccurate. These actions constitute not only an attack on Palestinians’ rights but also the rights of people and organisations in the US and worldwide that stand in solidarity with Palestinians.

“The worrying announcement that the United States will designate the BDS movement and human rights organisations as antisemitic is a very serious, direct attack on freedom of expression, association and the right to defend human rights“, declared Alice Mogwe, FIDH President. “We express our deepest solidarity with our colleagues and other human rights defenders targeted by these unfounded accusations and reaffirm our support for the realisation of the rights of the Palestinian people, who remain protected by international laws and conventions”.

The Israeli settlements in the Occupied Palestinian Territory (OPT), including in East Jerusalem, are illegal under international law and have severely undercut the human rights of Palestinians. For this reason, human rights organisations both in Palestine and around the world have been advocating for years against trade of products produced in settlements coming from the OPT, following a call from Palestinian civil society to support a campaign for boycott, divestment and sanctions in an effort to end Israel’s occupation, colonisation and apartheid against Palestinians. The UN has remained seized of the question and in February 2020, the Office of the United Nations High Commissioner for Human Rights (OHCHR) issued a report which identifies 112 business entities involved in certain activities relating to settlements in the OPT.

The BDS movement is a non-violent movement and boycotts are a peaceful means of expression. Yet human rights and advocacy organisations, anti-occupation activists, and Palestinian civil society groups have long been smeared as antisemitic for their support for boycott. This latest move, reportedly against more prominent organisations, is thus not an anomaly but part of a concerted effort to silence criticism of Israel’s crimes.

Equating antisemitism with BDS activities is baseless, incorrect and purposely defamatory: antisemitism refers to discrimination targeting Jewish people because of their ethnic and religious identity and, as all forms of hate, must be confronted in all its forms. The BDS movement, on the other hand, protests against a nation-state’s policies and actions, not against its people. This kind of protest is in line with the rights to freedom of expression and association, as the European Union has already recognised. Indeed, the European Court of Human Rights recently ruled that calls for boycotts fall within the right to freedom of expression and clearly distinguishes actions and statements concerning subjects of general interest – i.e., respect for international law by the State of Israel and the human rights situation in the OPT – that fall within the scope of political speech from incitement to hatred, violence and intolerance. This conclusion reflects the position of FIDH’s International Board, which formally recognised and reaffirmed the right of individuals to peacefully participate in and call for BDS measures to protest the Israeli government’s occupation and discrimination policies in 2016.

This latest announcement follows in the wake of other breaches by the Trump administration regarding international human rights law, especially in the context of Palestine. From its move of the US embassy to Jerusalem and the closure of Palestinian diplomatic offices in the US to the recognition of the Golan Heights as part of Israel and the attempt to erase the Green Line by acts such as extending scientific agreements to the illegal settlements, the Trump administration has waged a long-term campaign to legitimise Israel’s occupation and de facto annexation of Palestinian territory. Further, the Trump administration has consistently alienated itself from and attacked international organisations through actions such as pulling out of UNESCO, cutting off its contributions to the UN Relief and Works Agency for Palestinian Refugees (UNRWA), and announcing sanctions against the Prosecutor of the International Criminal Court in order to thwart its investigation into crimes by Israelis in Palestine.