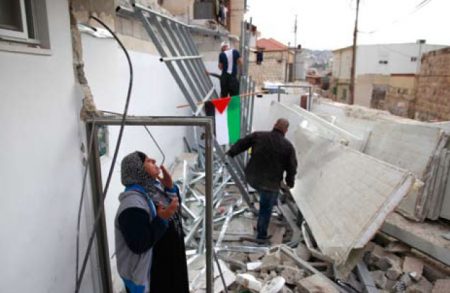 Israeli forces continued with systematic crimes in the occupied Palestinian territory (oPt), for the week of 24 – 30 November 2016.

Israeli soldiers killed a Palestinian child in the the northern part of occupied Jerusalem, while forces conducted 57 incursions into Palestinian communities across the West Bank, and one in the southern Gaza Strip. 68 civilians, including 19 children, were taken into Israeli custody.

Israeli forces have continued to commit crimes, inflicting civilian casualties. They have also continued to use excessive force against Palestinian civilians participating in peaceful protests in the West Bank and Gaza Strip, the majority of whom were youngsters. During the reporting period, Israeli forces killed a Palestinian child in Sho’fat refugee camp, north of occupied Jerusalem.

In the Gaza Strip, in context of targeting Palestinian fishermen in the sea, on 26 November 2016, Israeli gunboats stationed off al-Waha shore, northwest of Beit Lahia, north of the Gaza Strip, heavily opened fire at Palestinian fishing boats and chased them. The shooting recurred on the dame day afternoon in the same area. It should be noted the fishing boats were sailing within 4 nautical miles and no casualties were reported.  Moreover, similar attacks recurred on 27 and 28 November 2016 while fishing boats were sailing within 3 nautical miles.  However, neither casualties nor damages to the boats were reported

During the reporting period, Israeli forces conducted at least 57 military incursions into Palestinian communities in the West Bank and 8 others in occupied Jerusalem and its suburbs. During these incursions, Israeli forces arrested at least 68 Palestinian civilians, including 19 children. Twenty-one of them, including 11 children, were arrested in occupied Jerusalem.

Among those arrest, Israeli forces arrested Dr ‘Azzam No’aman ‘Abdel Rahman Salhab (60), a PLC Member from the Change and Reform bloc affiliated with Hamas, and Anas Hatem Qafishah, who is the son of another PLC Member and arrested from his family house in Hebron .

In the Gaza Strip on 29 November 2016, Israeli forces conducted a limited incursion in al-Shokah village, east of Rafah City in the southern Gaza Strip.  They levelled and combed the area in addition to establishing sand barriers in the area.  They later redeployed along the border.

In the context of house demolitions, on 29 November 2016, Israeli municipality demolished with hand tools two rooms and 35-square-meter balcony located in the “Central neighbourhood” in the area in Silwan village, south of occupied Jerusalem’s Old City.  The two rooms are part of a house belonging to al-Shyoukhi family that is comprised of 10 members.  The house was built ten years ago.

On the same day, the Israeli municipality demolished a house in al-Mukaber Mount neighbourhood, southeast of the city, under the pretext of building without a license.  The 110-square-meter house, which belongs to ‘Issam Khalaylah family, shelters 9 members, including 6 children.

Settlement activities and settlers’ attacks against Palestinian civilians and their property:

On 20 November 2016, Israeli forces distributed 12 notices to halt construction works for Palestinian families in Kherbet Um al-Khair, southeast of Yatta, south of Hebron, under the pretext of building without a license from the Israeli authorities.