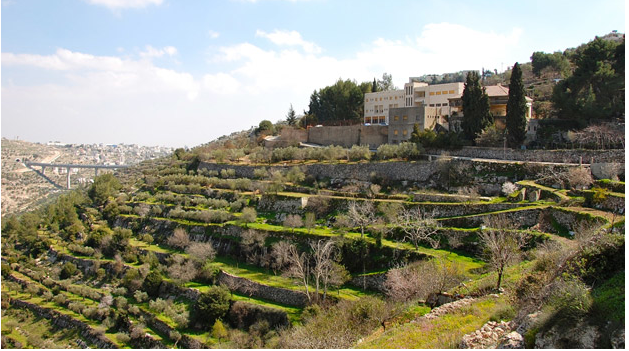 A lawsuit filed in a federal court in Chile this week charges three Israeli High Court Justices with war crimes for their decision last year to split an ancient monastery in the Bethlehem District from its community by running the Annexation Wall through it.

The lawsuit was filed on behalf of six Palestinian landowners from Beit Jala, where the Wall is being constructed through the monastery and splitting the Cremisan Valley. Five of the plaintiffs live in exile in Chile.

The Wall as a whole was declared illegal by the International Court of Justice in 2004, but in the 12 years since, the Israeli government has constructed the Wall throughout the West Bank in order to surround Israeli settlements constructed in violation of international law on Palestinian land.

85% of the Israeli Wall has been constructed on Palestinian land in the West Bank.

Last year the Society of St Yves – Catholic Center for Human Rights issued a report on the violations involved in building the annexation wall in Cremisan, and its destructive effect on the Palestinian Christian families living in the area.

In this week’s court case in Chile, the plaintiffs allege a number of violations, including war crimes, due to the 2015 decision by the Israeli High Court that allows the Wall construction through Cremisan. The Wall construction annexes a large section of Palestinian and church land for Israel, connecting the two illegal settlements of Gilo and Har Gilo.

That decision was issued by the Israeli High Court in response to a lawsuit filed by 58 Palestinian landowners and a group of nuns and monks from the Cremisan monastery.

The judges charged in the Chilean court are: former chief Justice Asher Grunis, and Justices Neal Hendel and Uzi Vogelman.