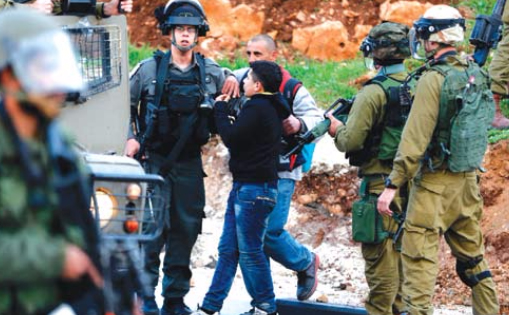 During the reporting period, Israeli settlers killed a Palestinian civilian in al-Shorfah neighbourhood in al-Bireh. On 06 March 2017, Israeli forces killed Basel Mahmoud Ibrahim al-A’raj (33) from al-Waljah village, west of Bethlehem, and living in al-Shorfah neighbourhood in al-Bireh. The Israeli media claimed that al-A’raj opened fire at the Israeli soldiers, who raided his house, so the latter opened fire at him. As a result, he was immediately killed and his body was taken to an unknown destination. The Israeli forces also claim that al-A’raj had been wanted for them for months. While carrying out the operation, the Israeli forces wounded 2 Palestinian civilians who gathered in the area to throw stones and empty bottles at the Israeli soldiers.

In the Gaza Strip, On 03 March 2017, two Palestinian civilians were wounded when Israeli forces stationed along the coastal fence, northwest of Beit Lahia in the northern Gaza Strip, opened fire at them. The two civilians were walking in the area and then approached the border fence. One of them sustained serious wounds while the other sustained moderate wounds.

On the same day, a Palestinian child was wounded while participating in a protest organized near the border fence between the Gaza Strip and Israel, north of Beit Lahia in the northern Gaza Strip. He sustained moderate wounds.

In the context of targeting Palestinian fishermen in the Gaza Sea, on 05 March 2017, Israeli gunboats stationed offshore, northwest of Beit Lahia in the northern Gaza Strip, sporadically opened fire at Palestinian fishing boats and chased them. However, neither casualties nor damages to the boats were reported. The shooting recurred at approximately 07:00 on Sunday, 03 March 2017, and at approximately 09:00 on Wednesday, 08 March 2017.

In the context of targeting the border areas, on 02 March 2017, Israeli forces stationed in the military watchtowers along the northern borders sporadically opened fire at the border area opposite to the Agriculture School, east of al-Burah area. Meanwhile, the Israeli force fired 4 artillery shells at an observation point belonging to al-Qassam Brigades, north of Beit Lahia. As a result, the site sustained material damages.

On 06 March 2017, Israeli soldiers stationed in the military watch tower opened fire at the Palestinian farmers, east of Gaza Valley village, east of Deit al-Balah in the central Gaza Strip. However, no casualties were reported.

In the context of airstrikes, on 02 March 2017, an Israeli drone launched one missile at an observation point belonging to al-Qassam Brigades, north of Beit Lahia in the northern Gaza Strip. As a result, it was completely destroyed, but no casualties were repoted.

Israeli Settlement Activities and settlers’ attacks against Palestinian civilians and their property:

On 06 March 2017, Israeli forces destroyed a house belonging to Taghrid Abu Mayalah in Khelet al-‘Eidah neighbourhood, south of Hebron. The under-construction house is established on an area of 120 square meters. On the same day, Israeli forces handed Hasan Shehdah ‘Amr a notice to stop construction works in his house in Beit Marsan village, west of Dura.

In the same context, On 04 March 2017, a group of settlers uprooted 15 olive seedlings and sprayed 7 others and 3 dunums planted with grain with toxic herbicides. Those seedlings and dunums belong to al-Herini family near “Havat Ma’aoun” settlement established on Palestinian lands confiscated from Yata, south of Hebron.

On 06 March 2017, a group of settlers attacked farmer ‘Abdullah Salman (53) and his wife Mariam Salman (53) while ploughing their land near “Havad Jel’ad” settlement established on Far’eta village, northeast of Qalqilya.

At approximately 12:40 on Friday, 03 March 2017, Palestinian civilians and International activists organized a protest in the center of Kufor Qaddoum village, northeast of Qalqiliya, and then made their way to the eastern entrance of the village in protest against closing that entrance since the beginning of al-Aqsa Intifada with an iron gate. When the protesters approached the entrance, Israeli forces fired metal bullets, tear gas canisters and sound bombs at them. As a result, Ahmed Abdul Malek Ibrahim ‘Othman (Shawer) (30), a journalist at the Radio and Television Commission, sustained a metal bullet wound to the forehead while an 18-year-old young man was hit with a metal bullet to the left knee.

“At approximately 12:00 on Friday, 03 March 2017, I went to Kufor Qaddoum village, to cover the weekly protest. I was taking photos via my cell phone camera before the protest began. Suddenly, the soldiers came from all sides. Three angry soldiers came close to me and one of them attempted to take my phone by force that almost broke it. The soldier then took it, forced me to open the lock and then deleted the video that I recorded. When the journalists and I were near the protest area, the incidents escalated. I was then hit with a metal bullet that hit my forehead though I was wearing a press uniform and bulletproof jacket, but the soldiers directly opened fire at me. I was then transferred to Dr. Darwish Nazzal Hospital to receive medical treatment. I needed only one stitch in my face.”

Following the Friday prayer, dozens of Palestinian civilians and Israeli and international human rights defenders organized demonstrations in Bil’in and Nil’in villages, west of Ramallah and al-Nabi Saleh, northwest of the city; at the entrance to al-Jaalzone refugee camp, north of the city; and in Kafer Qadoum village, northeast of Qalqiliyah, protesting against the annexation wall and settlement activities. Israeli forces forcibly dispersed the protests, firing live and metal bullets, tear gas canisters and sound bombs. They also chased the protesters into olive fields and between houses. As a result, many of the protesters suffered tear gas inhalation while others sustained bruises due to being beaten up by the Israeli soldiers.

At approximately 14:30 on Tuesday, 07 March 2017, dozens of Palestinians organized a protest in the vicinity of “Ofer” military camp, west of Ramallah, in protest against the murder of Basel al-A’raj. When the protestors approached the camp’s gates, the soldiers fired live bullets, sound bombs and tear gas canisters towards them and chased them. They then arrested 6 civilians, including a child, namely Khaled Obaidat (22), ‘Othman Nakhlah (20), Haitham Saber (20), Kamel Ghunaimat (23), Aysar ‘Asi (22) and Khalil Mohammed Jebril Abu Qabitah (13).

At approximately 02:30 on Friday, 03 March 2017, a number of young men gathered and made their way to the border fence between the Gaza Strip and Israel, north of Buret Abu Samrah, north of Beit Lahia village in the northern Gaza Strip. They threw stones at the Israeli soldiers, who were behind sand barriers and fired live bullets at the protestors. As a result, Fayeq Abed Rabboh Shams Salman (17) from al-Manshiyah Street in Beit Lahia village, sustained a live bullet wound to the left foot and was transferred to the Indonesian Hospital in Jabalia to receive medical treatment. His wounds were described as moderate.

Due to the number and severity of Israeli human rights violations this week, the PCHR made several recommendations to the international community. Among these were a recommendation that the High Contracting Parties to the Geneva Conventions fulfil their obligations to ensure the application of the Conventions, including extending the scope of their jurisdiction in order to prosecute suspected war criminals, regardless of the nationality of the perpetrator and the place of a crime, to pave the way for prosecuting suspected Israeli war criminals and end the longstanding impunity they have enjoyed;