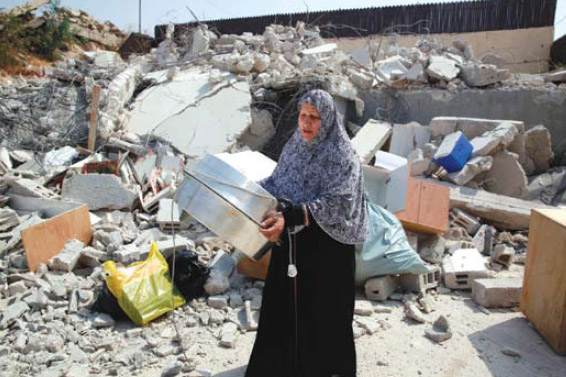 In its Weekly Report On Israeli Human Rights Violations in the Occupied Palestinian Territories for the week of 25– 31 August 2016, the Palestinian Center for Human Rights (PCHR) found that Israeli forces continued systematic crimes in the occupied Palestinian territories over the past week.
A Palestinian suffering from a mental disorder was killed at the western entrance to Silwad village, northeast of Ramallah, and 2 Palestinian civilians were wounded in al-Dheisha refugee camp, south of Bethlehem.

Israeli attacks in the West Bank:
In the West Bank, on 26 August 2016, in excessive use of lethal force, Israeli forces killed Eyad Hamed (38), who suffers from a mental disorder, at the western entrance to Silwad village, northeast of Ramallah. Israeli media reported that Israeli forces opened fire at a Palestinian who ran towards them and refused to stop when he was asked to, therefore, they suspected him and opened fire at him.
According to PCHR’s investigations and statements of eyewitnesses, Eyad Zakaria Mohamed Hamed (38), who suffers from mental disability, headed to the western entrance to Selwad village, northeast of Ramallah. Eyad approached a military watchtower established there and entered into an area surrounded by barbed wire. At approximately 12:35, Eyad tried to get out of the area, but he could not identify from where he entered, so he ran. As a result, Israeli soldiers opened fire at him and wounded him to the back. Eyad fell near the cement cubes at the entrance. A PRCS ambulance arrived at the area, but Israeli forces denied them access to the wounded. After that, an Israeli military ambulance arrived and put Eyad in a black bag, which means that he was dead. They then took Eyad’s corpse to “Ofer” settlement. In the evening, Eyad’s family received their son corpse and then took it to Palestine Medical Complex, where medical sources stated that Eyad was hit with a live bullet that entered his back and exited the upper side of his chest. Eyad’s corpse was directly taken from Palestine Medical Complex to Selwad village for funeral procession. It should be noted that the victim was married and has two children. The Israeli media reported that Israeli forces opened fire at the Palestinian civilian after he ran towards them and refused to stop, so they suspected him and opened fire at him.

On the same day, 2 Palestinian civilians sustained bullet wounds to the lower limbs when Israeli forces moved into al-Dheisha refugee camp, south of Bethlehem, to carry out abducts, during which dozens of youngsters gathered and threw stones and Molotov Cocktails at Israeli soldiers. Therefore, Israeli soldiers opened fire in response, due to which 2 Palestinian civilians were wounded and then taken to hospitals by private cars because ambulances were banned by Israeli forces from reaching the wounded.

On 27 August 2016, Israeli gunboats opened fire also in the same area. As a result, Abdul Latif Troush (21) and Ahmed Abu Hassan (22), both from al-Twam area in Jabalia, were abducted and then transported to Ashdod Seaport, while their fishing boat and 10 pieces of fishing net were confiscated. On the same day afternoon, Israeli forces released the 2 fishermen but kept the boat in custody.

On 28 and 29 August 2016, similar attacks were carried out by Israeli forces in the same area. On the second day, fisherman Mahdi Abu Reyala (38) and his son Nafez (16), from the Shati’ refugee camp, west of Gaza City, were abducted and the fishing boats was confiscated.

Israeli attacks on non-violent demonstrations:
Israeli forces attacked the weekly non-violent protests held on Friday of this past week.
Following the Friday prayer, on 26 August 2016, dozens of Palestinians and Israeli and international human rights defenders organized protests against the annexation wall and settlement activities in Bil’in and Ni’lin villages, west of Ramallah, al-Nabi Saleh village, northwest of the city, and Kufor Qaddoum village, northeast of Qalqiliya. Israeli forces fired live bullets, rubber-coated metal bullets, sound bombs and tear gas canisters to disperse the protesters and chased them into the agricultural fields and between houses. As a result, many civilians suffered tear gas inhalation while others sustained bruises as Israeli soldiers beat them up.

Israeli demolitions of Palestinian homes:
On Saturday afternoon, 27 August 2016, Israeli forces accompanied with municipality crews moved into several neighbourhoods in Silwan village, south of the Old City in East Jerusalem. They handed demolition notices under the pretext of building without a licence.
According to investigations conducted by a PCHR’s fieldworker and statements of eyewitnesses, municipality crews protected by Israeli forces moved into Wadi Helweh, Ein al-Lawah, Bier Ayoub, al-Bustan and Baten al-Hawa neighbourhoods in Silwan village and took photos of facilities. They raided and searched several facilities and handed demolition notices to their owners under the pretext of building without a licence while they demanded others to refer to the competent departments in the municipality. One of the owners was identified as Bahaa’ Adnan Zaytoun, who received a demolition notice for his house in “Hosh Zaytoun” in “Bier Ayoub” neighbourhood.

The house is inhabited by 5 individuals (the parents, 2 children aged 5 and 3 years and a 3-day old baby). It should be noted the house was built 2 years ago while the family moved into it only few months ago. Moreover, the municipality crews handed a demolition notice to a facility built of wood and belong to Mohammed Zaytoun in Bier Ayoub neighbourhood. Mohammed started building the facility 2 weeks ago. The municipality crews also handed another notice to demolish fences surrounding a piece of land in the same neighbourhood. They ordered the family to lower the fence into one meter. Furthermore, Salah Kash’am received a demolition notice of his building in Baten al-Hawa neighbourhood. The 150-square-meter building was built in 1994 and comprised of 3 floors; where 5 families live in. The municipality crews handed ‘Arafat Abu al-Hamam a demolition notice of a mobile container and room used as stores in al-Lawzah neighbourhood.
Around the same time, the municipality crews raided al-Bustan Set-in Tent, ordered to stop the repair works and remove the tiles under the pretext of repairing work without a licence. Two hours later, the Israeli forces again raided the tent to make sure the work stopped. Sheikh Mousa Oudah, Member of al-Bustan Neighbourhood Committee, said the tent was established in February 2009 after the municipality threatened to demolish al-Bustan neighbourhood in order to establish national gardens.
At approximately 07:30 on Monday, 29 August 2016, Israeli bulldozers demolished 6 dwellings and 2 livestock and horse barns in al-Ma’azi community, east of Jaba’ village, north of Jerusalem. It should be mentioned that those dwellings used to shelter families comprised of 28 members, including 18 children, rendering them homeless. The Colonization and Wall Resistance Commission donated those dwellings after the Israeli forces demolished houses belonging to 15 families in the abovementioned community in August 2015. Those dwellings belong to Fatmah Saraiy’ah, Raed Saraiy’ah, Ahmed Saray’ah, Fahimah Barakat and Najeh Saray’ah.

Najeh Ahmed Saray’ah, whose house was demolished, said:
“The Community residents were surprised when the Israeli forces surrounded their dwellings built of aluminium and tin plates and forced them to leave. It should be mentioned that after 15 houses were demolished last year, the Colonization and Wall Resistance Commission donated those dwellings. The Israeli forces also did not allow the families to vacate their furniture and demolished the dwellings above it. They also demolished 2 livestock and horse barns and 2 kitchens.”
Around 150 individuals living in al-Ma’azi Community suffer from difficult life conditions. In addition to the homelessness life imposed on them by the Israeli forces, the inhabitants suffer to find potable water as each individual is forced to buy a small water tank that costs NIS 80 and meets their demand for several days. The Israeli forces also target their only source of living as they prevent their sheep to reach the grasslands. They also prevent giving young men in the Community work permits, resulting in a prevalence of unemployment in the Community.
At approximately 04:00 on Tuesday, 30 August 2016, Israeli bulldozers demolished a house in Sur Baher village, south of Jerusalem, belonging to Wasim ‘Atiyah under the pretext of building without a permit.
Wasim said to a PCHR fieldworker that Israeli forces raided his house in the dawn, forced the family to leave. They allowed the family to take some furniture out, but then demolished the house on the rest. The bulldozers demolished the fence around the house and the main door. Wasim added the municipality bulldozers carried out the demolition without a prior warning. He also said that he moved along with his family comprised of his pregnant wife and 3 children aged between 4 to 8 years into his 120-square-meter house a year ago as the house cost him around NIS 400,000. It should be mentioned that he submitted the needed files to obtain a construction licence for his house, and the Municipality Court set the end of next October to hold a session to discuss the house licence.
In the same context, Israeli municipality crews accompanied with Israeli forces raided Wad Yasoul neighbourhood in Silwan village, south of the Old City. They demolished 2 under-construction houses belonging to Eyad Nairoukh. Eyad started building the 2 houses of bricks on 11 August 2016, but was surprised with the demolition. They also demolished the fences around the abovementioned houses belonging to Aziz Barqan and Abed Shuwaiki, claiming that they were built without a licence. Eyad emphasized that the Israeli bulldozers demolished 2 under-construction houses built two weeks ago on an area of 160 square meters. He also mentioned that the municipality previously handed him a demolition notice on 25 August 2016, and he was surprised when the neighbours called to tell him about the demolition.

At approximately 01:00, on 30 August 2016, Israeli forces accompanied with a military bulldozer moved into Soud Valley, north of Dura village, southwest of Hebron. They stationed around a house belonging to Mohamed Abed al-Majeed ‘Amayrah (38) and then raided it. It should be noted that the abovementioned house was built on an area of 200 meters and there was a water well around it. Mohamed’s family consisting of his wife and their two girls lives in the house. Israeli forces planted explosives in the house walls and then took all the neighbourhoods 400 meters away from the targeted house and locked all of them in one house. At approximately 04:00, Israeli forces bombed the house. It should be noted that Mohammed has been abducted by Israeli forces on 02 July 2016, claiming that he carried out a shooting attack at a vehicle, which resulted then in the killing of a female settler. On 23 July 2016, Israeli forces handed an administrative demolition notice to the family, according to Regulation 119 of the Defence (Emergency) Regulations 1945.