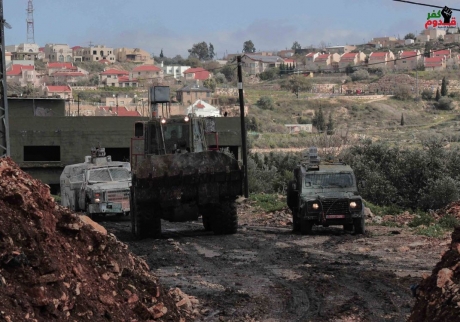 A protest in Kafr Qaddoum village in the northern part of the West Bank on Friday was met with Israeli military violence, including tear gas, rubber-coated steel bullets and sound bombs.

The protesters, which included local Palestinians as well as Israeli and international supporters, held a march and rally to oppose the Israeli military takeover of large parts of their town over the past 14 years for the construction of illegal colonial Jewish-only settlements.

As the march began, Israeli soldiers stormed the village in armored jeeps and vehicles, assaulting the protesters with tear gas and other semi-lethal weapons.

The Palestinian news agency Ma’an reported that Murad Shteiwi, one of the protest organizers, told their reporter that the soldiers also raided the home of Helmi Shteiwi during their invasion of the village. The soldiers ransacked the home, destroying property, but they did not find anything and did not abduct anyone.

A day before the weekly protest was scheduled to take place, Israeli soldiers invaded the village before dawn and raided Hikmat Shteiwi’s home. According to Muraq Shteiwi, the soldiers locked the man’s wife in one room and then interrogated the two children, aged 12 and 13, in another room without the presence of their parents.

The attacks on Kafr Qaddoum, and particularly the crackdown on the Shteiwi family, has come in the wake of a video that was released publicly last month showing Israeli soldiers using a seven-year old village child as a human shield.