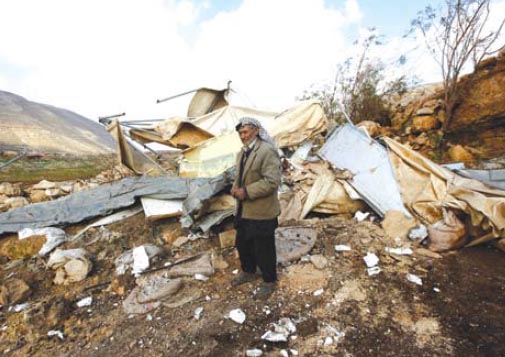 In the West Bank, Israeli forces stationed at Qalandia checkpoint at the northern entrance to occupied Jerusalem opened fire at Jihan Hashimah (35) from al-‘Issawiya village, northeast of the city. As a result, she was hit with 3 bullets to the leg and then abducted. The aforementioned woman was walking near the cars track when she was shot. Israeli forces claimed she had a knife.

During the reporting period, Israeli forces conducted at least 74 military incursions into Palestinian communities in the West Bank. During these incursions, Israeli forces abducted at least 67 Palestinian civilians, including 10 children. Ten of them, including 6 children, were abducted in occupied Jerusalem. Moreover, two civilians were abducted while participating in Kufor Qaddoum weekly protest in addition to arresting the wounded woman at Qalendia checkpoint. Therefore, during this week, the number of abducted civilians mounted to 70, including 10 children and a wounded woman.

On 02 January 2017, in light of the cold and rainy weather during these days, Israeli forces and their heavy equipment demolished 11 dwellings built of tin plates belonging to al-Jahalin Bedouin family in Sneisel Valley area in al-Khan al-Ahmar, east of occupied Jerusalem, rendering 87 individuals homeless. Most of them were children and women.

On the same day, Israeli municipality bulldozers demolished a house belonging to the family of ‘Amer ‘Ebeido in Beit Hanina village, north of the city. The two-storey house sheltered two families of 8 members, including a child.

In the Gaza Strip, in the context of targeting fishermen in the Sea, on 01 January 2017, Israeli gunboats opened fire at Palestinian fishermen, northwest of Beit Lahia in the northern Gaza Strip, and chased them. The shooting recurred in the same area on 03 January 2017 and on 04 January 2017 in the western side of Jabalia. The boats were sailing in those incidents within 3 nautical miles. However, neither causalities nor damages to the boats were reported.

On 04 January 2017, an Israeli gunboat hit a fishing boat manned by Mohammed al-Hessi (33) from al-Shati’ refugee camp. As a result, the boat capsized and the fisherman is so far missed. The boat was sailing within 5 nautical miles off al-Soudaniyah shore in the northern Gaza Strip.

Israeli Settlement activities continued in the West Bank. On 03 January 2017, Israeli forces and its heavy equipment demolished 14 dwellings and 22 other facilities in Kherbet Tana, east of Beit Foriq village, east of Nablus. Those facilities belong to 15 families comprised of 86 members, including 33 children. It should be mentioned that the Israeli forces demolished dwellings in Kherbet Tana 4 times before in 2016 in order to Empty them of their original inhabitants and seize them under the pretext that they are located within Area C.

Following the Friday prayer, on 30 December 2016, dozens of Palestinian civilians and Israeli and international human rights defenders organized demonstrations in Bil’in and Ni’lin villages, west of Ramallah, and al-Nabi Saleh village, northwest of the city, protesting against the annexation wall and settlement activities. Israeli forces forcibly dispersed the protests, firing live and metal bullets, tear gas canisters and sound bombs. They also chased the protesters into olive fields and between houses. As a result, many of the protesters suffered tear gas inhalation while others sustained bruises as Israeli soldiers beat them up. Israeli forces also abducted Jamil al-Barghuthi (45) from Deir Abu Mash’al, northwest of Ramallah, and Ghaleb Helmi Shtaiwi (25) from Kafer Qadoum village, while both were participating in the weekly demonstration of Kafer Qadoum village.

Due to the number and severity of Israeli human rights violations this week, the Palestinian Center for Human Rights (PCHR) called on the international community to follow certain recommendations. Among these were a recommendation that the international community act to stop all Israeli settlement expansion activities in the Occupied Palestinian Territories through imposing sanctions on Israeli settlements and criminalizing trading with them.

In addition, PCHR calls upon the United Nations to confirm that holding war criminals accountable in the Palestinian-Israeli conflict is a precondition to achieve stability and peace in the regions, and that peace cannot be built at the expense of human rights.