One Detained as Troops Attack Peaceful Protest near Qalqilia 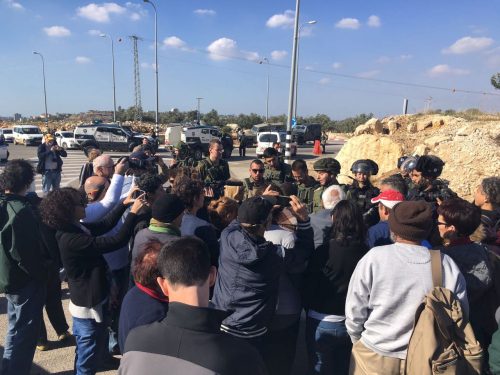 Israeli troops attacked on Saturday a peaceful protest organized by Combatants for Peace, CFP, and the villagers of Ezbit Tabeeb, northern West Bank, against a new settlers road Israel is planning to build.

Israeli and Palestinian activists joined the villagers of Ezbit Tabeeb and land owners in addition to local activists from the nearby city. Palestinian Minister of Settlement and the Wall affairs, Waleed Assaf also joined the protest on Saturday.

Early in the day, Israeli troops manning checkpoint 109 near Ezbit Tabeeb stopped cars and a bus carrying CFP Israeli members coming to join the march today and forced them back. Some were able to join the people of Ezibit Tabeeb.

By midday on Saturday, people managed to reach the lands were Israel is planning to build the near road known to locals as settlers’ road number 531. After holding the midday prayers at the lands set to be destroyed by the occupation protesters removed army markings that were installed on olive trees slated to be uprooted. Troops arrived at location and assaulted the peaceful protesters and detained local activist Ala Al-Doyurie, 23, and took him to unknown location.

“Combatants for Peace called for the protest today to be the first of many activities which part of the ongoing work against the new settlers’ road that is planned to be built on lands taken from local farmers in our area. The army will destroy 500 olive trees owned by local farmers to build this road.” Explained Mussa Tabeeb, coordinator of  CFP in Ezbit Tabeeb.