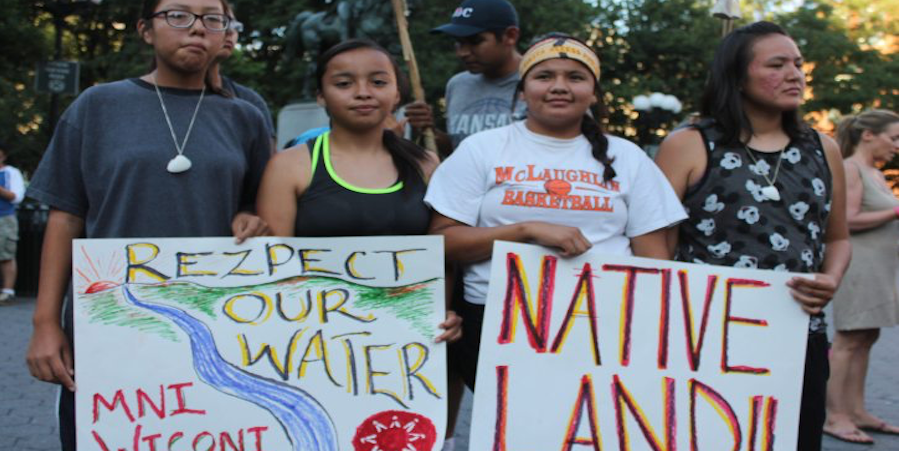 ‘In the face of settler colonial genocide and destruction, the land and water defenders at Standing Rock are defending all of us.’

The Popular Front for the Liberation of Palestine (PFLP), a leftist Palestinian political party founded by George Habash in 1967, announced on Saturday their strongest support for and solidarity with the indigenous resistance at Standing Rock against the Dakota Access Pipeline.

“In the face of settler colonial genocide and destruction, the land and water defenders at Standing Rock are defending all of us,” the statement reads.

“We see [the defenders] reflected in the Palestinian mothers holding tight to their olive trees targeted for settler destruction; in the Palestinian farmers who resist in the so-called ‘buffer zones;’ [in] the fishers who brave warship fire to preserve Palestinian fishery; in the land and water defenders of the world who resist the vicious onslaughts of settler colonial capitalism.”

The Dakota Access Pipeline is a 3.8 billion dollar pipeline that, if completed, would carry over 500,000 barrels of crude oil per day from North Dakota’s Bakken oilfield across nearly 1,200 miles to Illinois.

The Sioux tribes oppose the project, which is owned by Texas oil company Energy Transfer Partners and enjoys approval from the State of Dakota and US Army Corps of Engineers. They stress that the environmentally disastrous pipeline passes through ancestral burial grounds and violates their sovereign rites.

Members of nearly 100 other tribes from across the U.S. and Canada have joined them in their efforts to protect the water and sacred place.

But, police and private security forces have responded to the water protectors’ peaceful protests and encampments near the construction site brutally.

The Boycott, Divestment and Sanctions (BDS) movement has long campaigned against G4S for administering security systems at Israeli prisons, detention centers and checkpoints – all sites of grave Israeli human rights violations against Palestinians.

U.S. police forces have escalated their offensive against protectors as well, conducting violent raids into protector encampments near the construction area. Videos and testimonies have surfaced of police using pepper spray, sound-grenades, and beanbags rounds against protectors. Protectors say the police are culpable of using excessive force. Along with physically intimidating and in many cases injuring protestors, the police have arrested hundreds of indigenous activists.

Khaled Barakat, a leftist writer spoke with the PFLP about common context of struggle between indigenous water protectors and the Palestinian liberation movement. “The use of mass arrests and incarceration as a mechanism to confiscate land and resources and suppress liberation movements is of course not surprising,” Barakat explained. He concludes:

“It is a technique that we see used in Palestine, keeping thousands of Palestinian political prisoners behind bars for struggling for the freedom of their people and their land… In fact, many aspects of Zionist settler colonialism in Palestine were developed in light of the colonial techniques used in the US and Canada.”

The Palestinian BDS National Committee has also extended their support to Standing Rock, as have the Palestinian Youth Movement – United States Branch, and individual Palestinians around the world.

The PFLP’s recent statement comments on such solidarity:

“We encourage all Palestinians, especially the Palestinian community in the United States, to continue to develop and build upon the efforts of Palestinian youth in support, solidarity and participation in the Standing Rock camps of struggle, and in developing long-term, sustainable, mutual joint struggle and solidarity with Native liberation movements.

“There is a long history of connections and common struggle between our liberation struggles, together in the global movement to defeat settler colonialism, Zionism and imperialism, that we must nurture and build upon until victory and liberation,” it concludes.