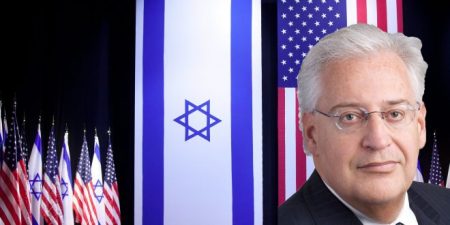 PLO Executive Committee Member Dr. Hanan Ashrawi and the Secretary-General of the PLO Executive Committee Dr. Saeb Erekat both issued press releases criticizing US ambassador David Friedman, who said that Israel is occupying only 2% of the West Bank, among other statements that show his “blatant bias to Israel,” as Dr. Ashrawi called it, whereas Dr. Erekat said that it is an attempt to normalize Israel’s colonial policies.

According to the PNN, Dr. Ashrawi said that “The US Ambassador to Israel has proved once again that he is completely removed from reality. In addition to his long-standing support for Israeli settlements, and after referring to the “alleged occupation” of Palestinian land, he has the audacity to maintain that Israel occupies only 2% of the West Bank and that illegal settlements that carve, annex and steal Palestinian land are part of Israel. This Ambassador has continued to visit illegal settlements and even joined the Israeli celebrations in June marking the occupation of Palestinian land in 1967.

“Not only does the Ambassador break from long-standing US policy, he is also at odds with the international legal, political and moral consensus. His positions are a mirror reflection of the settlers’ ideology in Israel’s right-wing coalition government rather than that of successive administrations that have claimed to be invested in peace.

“The US Ambassador to Israel cannot impose his alternative facts or realities on an entire people that has been held captive under a brutal occupation for half a century. The occupation exists. Settlements are illegal under international law and constitute a war crime. These facts and realities are not in question.

“If the US Administration is truly committed to peace, it will hold its Ambassador accountable for his consistently outrageous and morally repugnant attitude, actions and statements.”

For his part, Dr. Erekat said that it is not the first time that Mr. David Friedman has exploited his position as US ambassador to advocate and validate the Israeli government’s policies of occupation and annexation. He was the first US ambassador to participate in the Israeli celebrations of the colonial occupation and annexation of East Jerusalem this June, has continuously announced his intention to continue visiting illegal settlements in Occupied Palestine, as well as he has referred to the Israeli occupation of Palestine as “alleged”.

His latest statement about Israel, “occupying only 2% of the West Bank” declaring that “Israeli settlements are part of Israel” is not only false and misleading but contradicts international law, United Nations resolutions and also the historical US position.

Israel is internationally recognized as the occupying power over 100% of Palestine, including in and around Occupied East Jerusalem. Such positions undermine ongoing efforts towards achieving a just and lasting peace between Israel and Palestine on the 1967 border.