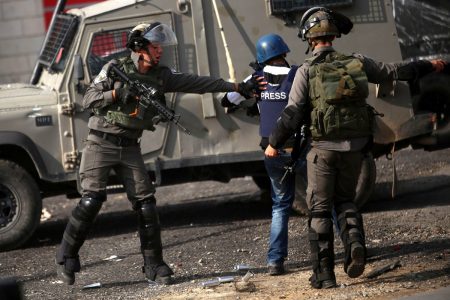 The Palestinian Ministry of Information (MOI) has documented a number of Israeli violations in an ongoing systematic escalation against Palestinian journalists, perpetrated in an attempt to whitewash Israeli crimes against the Palestinians.

In a report issued by the Mentoring and Follow-up Unit in the ministry, it mentioned that 43 violations committed by Israeli occupation forces during September of 2017, including direct target, detention, interrogation, shooting and preventing them from covering events.

The report also recorded one case of extended detention for Ragheed Tabeesah, three others of actual judgments, and three of postponed trial for several times.

Eight correspondents were beaten and suffocated with toxic gas as they were banned from covering newsworthy events.

Israeli soldiers broke into the homes of five journalists and ransacked their belongings. They also confiscated two homes and imposed fines.