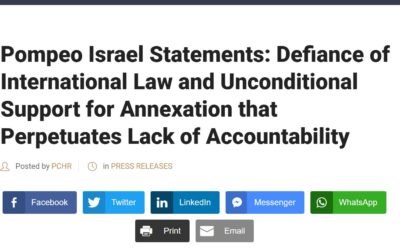 Ref: 49/2020: Date: 20 May 2020: The Palestinian Center For Human Rights (PCHR): While the world is coming together to combat coronavirus (COVID-19), the United States and its ally, Israel, are exploiting the pandemic by aggravating the systematic violations of international law in the occupied Palestinian territory (oPt).

US Secretary of State, Mike Pompeo, made a quick visit to  Israel to support its new government in its plan to annex nearly 30% of West Bank lands, renewing the threats aiming at undermining the legitimacy of the International Criminal Court (ICC), the last legal resort for Palestinians to confront the annexation project and the systematic violations of international law by Israeli occupation forces (IOF).

Secretary Pompeo made the following statement on Friday, 15 May 2020, “The International Criminal Court is a political body, not a judicial institution. This unfortunate reality has been confirmed yet again by the ICC Prosecutor’s attempt to assert jurisdiction over Israel, which like the United States, is not a party to the Rome Statute that created the Court,” adding that, “The United States reiterates its longstanding objection to any illegitimate ICC investigations. If the ICC continues down its current course, we will exact consequences.”

These statements are only the latest in the US administration’s systematic attacks on the ICC, which escalate with every progress the ICC makes towards investigating international war crimes committed by IOF in the oPt or by US forces. For over 2 years, all level of the US administration engaged in attacks on the Court and providing unconditional support to Israel in a persistent defiance of international law.

On 09 September 2018, John Bolton, former US National Security Adviser, attacked the ICC, its judges and considered it illegitimate, criticizing Palestine’s accession to the Court and the threat of a criminal investigation into what he called, Israel’s “actions to defend citizens from terrorist attacks in the West Bank and Gaza,” reiterating that “the United States will always stand with our friend and ally, Israel.”

Also, on 17 March 2020, Pompeo threatened two staffers at the Office of the ICC Prosecutor by the name, signaling that the US could act against them, as well as other ICC personnel and their families. Pompeo said, “We want to identify those responsible for this partisan investigation and their family members who may want to travel to the United States or engage in activity that’s inconsistent with making sure we protect Americans.”

Last year, the US revoked the entry visa of Public Prosecutor, Fatou Bensouda. Additionally, Pompeo announced in a press conference on 15 March 2020, that the US shall enforce restrictions on entry visas for individuals responsible for any ICC investigations of Americans, adding that “these visa restrictions may also be used to deter ICC efforts to pursed allied personnel including Israelis … These visa restrictions will not be the end of our efforts,” Pompeo said. “We’re prepared to take additional steps, including economic sanctions, if the ICC does not change its course.”

The new Israeli government was formed to respond to COVID-19; yet, it had the annexation of the Jordan Valley on the top of its priorities. In its first meeting on 17 May 2020, Israeli Prime Minister, Benjamin Netanyahu, considered an ICC investigation a strategic threat to Israel, stating that investigating Israel for alleged crimes against Palestinians is a “rare strategic threat to Israel,” stressing that banning such a probe is one of the new government’s top priorities.

“The ICC is not a novelty, its work has been the result of a consensus of international, Israeli and Palestinian human rights organizations and United Nations bodies, including the Human Rights Council, the General Assembly and the Security Council, as well as UN investigation committees, who agree with the work of the ICC and support its conduct.

The US and Israel are the only parties who are politicizing the Court. The Trump administration and Netanyahu government are taking advantage of the coronavirus pandemic, as the whole world is occupied trying to mitigate this crisis, to commit war crimes that amount to genocide and crimes against humanity in the oPt, uniting to undermine international order and world peace.

The US administration’s insolent threats to the ICC, its staff and their families, while the world watches on without commotion, is a shame. The States Parties to the Rome Statute must act immediately. The international community should either put its weight behind international law and protect international judicial institutions or let the law of the jungle rule.”

The ICC Prosecutor had confirmed on 30 April 2020 the Court’s territorial jurisdiction to conduct an investigation into the situation in the West Bank, including East Jerusalem, and the Gaza Strip in a report to the Pre-Trial Chamber I. On 05 March 2020, the Court agreed to investigate war crimes committed by US forces in Afghanistan.

PCHR is monitoring, with grave concern, the systematic attacks by the US administration and its ally, Israel, on the ICC. The Court is the last hope for victims of international war crimes, including Palestinian civilians in the oPt who are subjected to organized war crimes that amount to genocide and crimes against humanity by IOF.

PCHR believes that the constant US attacks on the ICC is an onslaught on international law and a threat to world peace, enhancing the culture of impunity; therefore, the Centre calls upon the international community to take real steps to champion the noble values that brought about these institutions in the face of the continued threats against the Court, its judges, and staff.

PCHR calls upon States Parties to the Rome Statues to condemn the attack and reiterate its support for the work of the ICC under all circumstances and to take effective steps towards protecting the Court and its staff.

If you got this forwarded and you want to subscribe, send mail to  request@pchrgaza.org