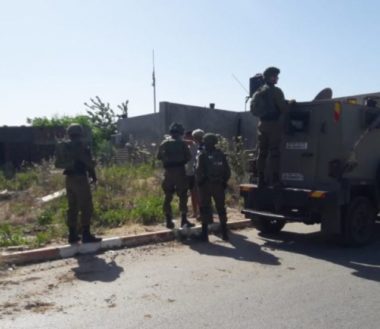 The attack was carried out against the family home of the late Abdul-Qader Shaqqour, when dozens of soldiers surrounded the property and tried to smash its doors, before the family opened it and the soldiers initiated a very violent search of the property.

The soldiers also attacked the family with clubs and batons during the search and were shouting at them after the army claimed they “were trying to prevent the soldiers from entering the property.”

The family said they were only trying to prevent the soldiers from using violence and excessive force against them, their furniture, and belongings, and did not physically try to stop them.

Essam Abu Ya’coub, the head of Kifl Hares Town Council, said that, just a few days ago, an army bulldozer accompanied the soldiers in an invasion into the town, before uprooting and bulldozing a land owned by Shaqqour family, where in 2009, the army installed a military tower which still stands on their land.

Ya’coub added the military tower was built by the soldiers on the family’s property right at the entrance of the town, and that the army has been bulldozing lands in that area all the way to the main road near Kifl Hares Junction, as Israel is ongoing with uprooting Palestinian land to install sewage and water lines that would serve the nearby illegal colonies, built on Palestinian lands in direct violation of International Law and the Fourth Geneva Convention.

He also stated that neither the army, nor the “Civil Administration Office” the executive branch of Israel’s illegal occupation in the West Bank, have ever informed the residents of the infrastructure work or any type of project in the entire area.