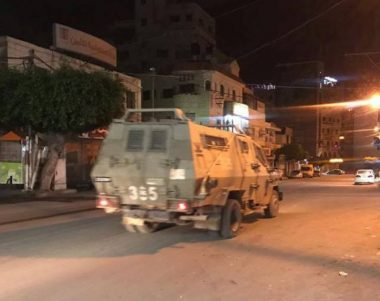 Updated: The Palestinians Prisoners’ Society (PPS) has reported that Israeli soldiers abducted, at night and throughout dawn hours Monday, at least twenty-five Palestinians, during violent and extensive military invasions and searched of homes, in the occupied West Bank.

The Bethlehem office of the PPS said the soldiers abducted Khalil Taha Taqatqa, 24, from Beit Fajjar town, south of the city, Abdullah Ata al-Hreimi, 18, from Wad Ma’ali, in the center of Bethlehem, and Laith Ahmad Abu Mfarreh, 18, from Teqoua’ town, east of Bethlehem.

The soldiers also installed many roadblocks at the main roads leading to Sa’ir and Halhoul towns, in addition to Hebron’s northern road, before stopping and searching dozens of cars, and interrogated many Palestinians while inspecting their ID cards.

In addition, the army installed roadblocks, east of Ramallah, and placed concrete blocks on the main road between Ramallah and al-Biereh, and the al-Jalazoun refugee camp.

Furthermore, the soldiers invaded Beit Jala city, west of Bethlehem, and broke into the home of Adham Hamamda, near the Arab Orthodox Club, and occupied its rooftop to use it as a monitoring post and military tower.