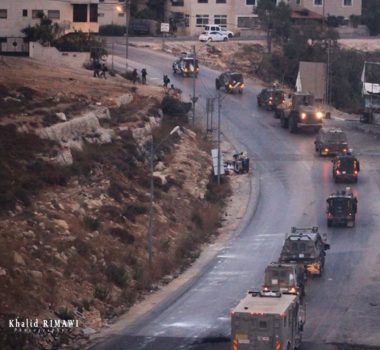 The Palestinian Prisoners’ Society (PPS) has reported that Israeli soldiers abducted, on Monday at dawn, 32 Palestinians from their homes in several parts of the West Bank, including nine from occupied Jerusalem.

In addition, the soldiers interrogated Shaima’ Rimawi, the widow of Saleh Omar Barghouthi, 29, who was killed by the army on December 12, 2018, and confiscated mobile phones and more than 7000 Shekels from her home.

21 of the abducted Palestinians were taken prisoner for their homes in the Ramallah and al-Biereh Governorate, including 14 from Kobar town.

The soldiers also closed the road between Kobar and Borham towns, north of Ramallah, after placing sand hills on it, and searched dozens of homes, in addition to invading Shkheidim nearby town, and firing gas bombs, rubber-coated steel bullets and live rounds at protesters.

The soldiers abducted nine Palestinians from their homes in occupied Jerusalem, and later released some of them after ordering them under house arrest four five days.