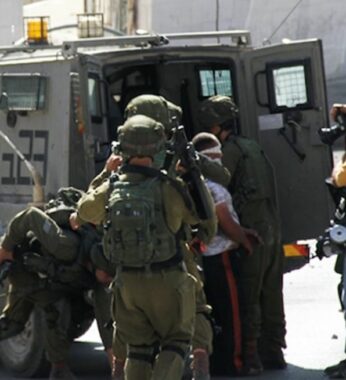 The Palestinian Prisoners’ Society (PPS) has reported that Israeli soldiers abducted, Tuesday, 45 Palestinians, most of them are former political prisoners, in the Hebron governorate, in the southern part of the occupied West Bank, during extensive and violent searches of homes.

The PPS said the soldiers abducted Monjid Mousa al-Juneidi and Abdul-Khaleq Natsha, from their homes in Hebron city.

Also in Hebron city, the soldiers abducted Siham al-Battat, the mother of a political prisoner, identified as Haitham Battat, in addition to a young woman, identified as Amna Abdul-Ghani Abu Turki, who was taken prisoner at a military roadblock near the Ibrahimi Mosque in the city.

It added that the soldiers also stormed and ransacked dozens of homes in Doura town, south of Hebron, before abducting 22 Palestinians, including nine former political prisoners.

In Bani Neim town, east of Hebron, the soldiers abducted a former political prisoner, identified as Monir Farah Manasra, while Maran Abdul-Qader Abu Fara, was abducted from his home in Surif town, northwest of Hebron.

In Beit Ummar town, north of Hebron, the soldiers searched dozens of homes in several neighborhoods, after storming them and smashing their doors, causing excessive damage to the properties, before abducting four former political prisoners.

It is worth mentioning that the soldiers installed many roadblocks in several neighborhoods in Hebron city, including its northern and southern main roads, in addition to the entrances of Sa’ir and Halhoul towns, before stopping and searching dozens of cars, and interrogated scores of residents while inspecting their ID cards.