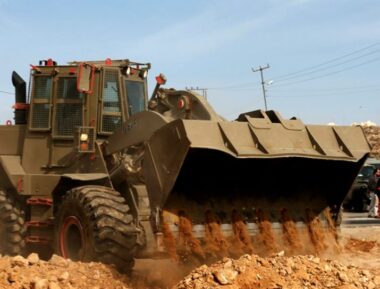 For the second day, Israeli soldiers continued to uproot Palestinian farmlands, east of the ath-Thaheriyya town, south of Hebron, in the southern part of the occupied West Bank.

The ath-Thaheriyya Town Council has reported that the soldiers are uprooting lands in Khirbat Zannouta area, owned by the families of at-Till, Jabarin, and the as-Samamra.

It added that the army is preparing to illegally confiscate the privately-owned Palestinian farmlands to expand the Industrial Zone of the so-called “Regional Council of Settlements” in the area.

The soldiers closed the entire area and attacked many Palestinians trying to enter their lands, in addition to threatening to abduct them and impose fines.

It is worth mentioning that the soldiers abducted, Tuesday, 45 Palestinians, most of them are former political prisoners, in the Hebron governorate, during extensive and violent searches of homes.