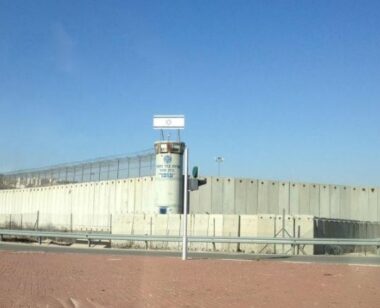 The Palestinian Prisoners’ Society has reported, Tuesday, that the number of detainees in Ofer Israeli prison, who have been officially diagnosed as Covid-19 positive, has arrived to 12, and added that a total of 29 detainees in various prisoners are infected with the virus thus far.

The PPS said the infected detainees are in Section 14 of Ofer Israeli prison, which is already overcrowded, and added that five of them tested positive on Tuesday evening, and seven during morning hours.

It also stated that a total of 27 detainees in various Israeli prisons are Covid-19 positive, in addition to two others who were officially diagnosed after being tested by the Palestinian Health Ministry immediately upon their release.

The PPS called on the International Red Cross and various organizations to ensure the well-being of the detainees, and to send an independent medical committee to the prisons to test more detainees, and to observe the living conditions in addition to ensuring adequate preventative measures are implemented.

It also accused Israel of trying to deceive the International Community by holding important facts, especially regarding the number of infected detainees in all of its prisons, and warned that the fact only Israel knows the exact numbers without officially announcing them and without international observers, means that there is no sure way to get adequate information.

It is worth mentioning that Israel is holding captive more than 4500 Palestinian detainees, including women, children, elderly, and many who are suffering from various serious issues, such as cancer, renal failure or diseases, and other conditions.