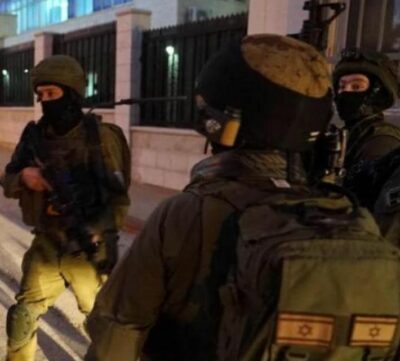 The Palestinian Prisoners’ Society (PPS) has reported that Israeli soldiers abducted, on Wednesday at dawn, at least ten Palestinians, including siblings, from their homes in several parts of the occupied West Bank.

The PPS office in Qalqilia, in northern West Bank, said the soldiers invaded and searched many homes in Kafr Laqif village, east of the city, before abducting two siblings, identified as Maher, 56, and Samer Ali Ra’ey, 43, in addition to Moayyad Sameeh Assaf, 28.

In Jenin, also in northern West Bank, the soldiers abducted Anas Yousef Tazaz’a, 36, from his home in Qabatia town, south of the city.

The soldiers also abducted Mahmoud Asafra, from his home in Beit Kahil town, north of Hebron city, in addition to Essam Rezeq Saya’ra, from Kharas town, northwest of Hebron.

In Ramallah, in central West Bank, the soldiers abducted a former political prisoner, identified as Mahmoud Safi, from Deir Abu Mashal town, northwest of the city.

It is worth mentioning that the soldiers also invaded and ransacked many homes in the al-Jalazoun refugee camp, north of Ramallah, and interrogated many Palestinians while inspecting their ID cards.