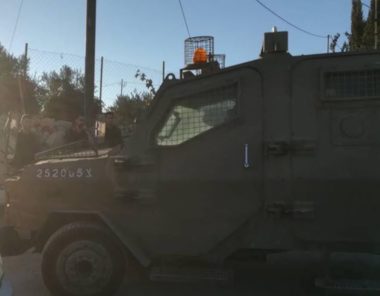 The PPS office in Hebron, in the southern part of the West Bank, the soldiers invaded Ethna town, west of the city, and abducted Safwat Rafiq Tmeizi, 29, after violently searching his home, causing damage.

It added that the soldiers also invaded and violently searched the home of Essam Taiseer Tmeizi, in Wad Aziz area, in Ethna.

The soldiers also installed roadblocks on many roads linking Hebron with surrounding towns, and main streets in the city, before stopping and searching dozens of cars, and interrogated many Palestinians while inspecting their ID cards.

The army said it found and found and confiscated two pistols, during searches in a village near Hebron.

In Nablus city, in northern West Bank, the soldiers searched many homes and abducted Samer Shansheer from Asira Street, and Ayman Shakhsheer, from Ras al-Ein neighborhood.

In addition, the soldiers abducted Qais Hamadna and Amir Hamadna, from their homes in Asira ash-Shamaliya town, north of Nablus, and Mohammad Azzam Hamdan, from al-Qibliya town, south of the city.

In Qalqilia, also in northern West Bank, the soldiers abducted one Palestinian, identified as Moath Ammawi, 21. In Bethlehem, the soldiers invaded Wad Rahhal village, installed roadblocks around local schools, while the students were trying to reach them, and searched many cars.

It is worth mentioning that the soldiers injured ten Palestinians, including two journalists, during protests that took place when the soldiers invaded Nablus.

In the Gaza Strip, Israeli navy ships opened fire on several fishing boats, in Palestinian territorial waters, near the shore of Beit Lahia, in the northern part of the coastal region, forcing the fishermen away without being able to fish and provide for their families.