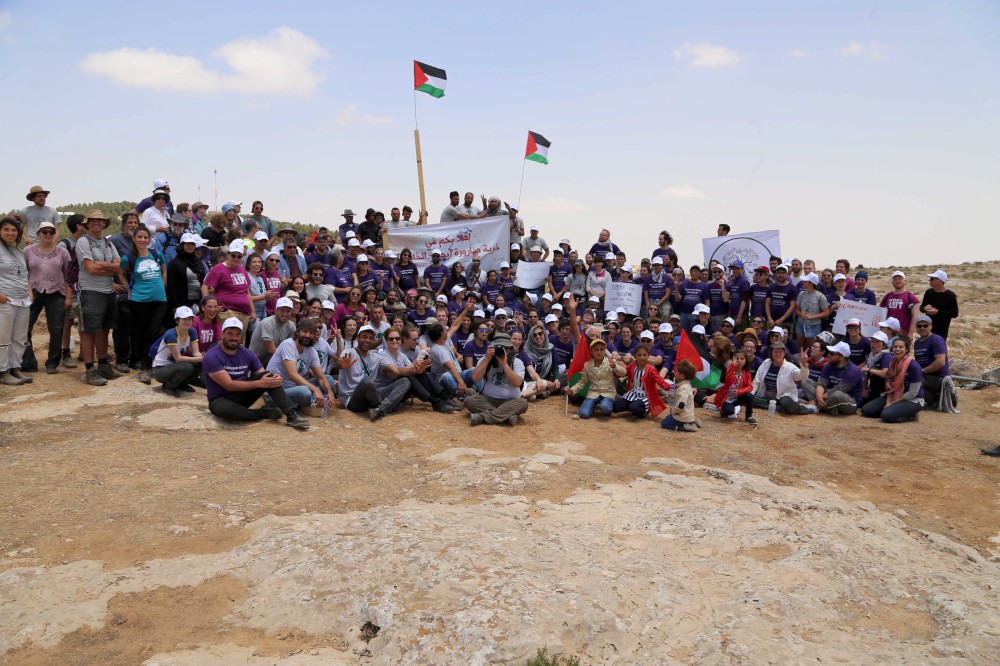 On Friday,  after decades of injustice, marginalization, and occupation, a group of more than 300 Palestinians, Israelis, Jews, and internationals have joined with the families of Sarura to build the Sumud: Freedom Camp.

The camp is located on land belonging to the village of Sarura, whose inhabitants were expelled by Israeli forces between 1980 – 1998. Through their nonviolent and unarmed act of co-resistance to the Israeli occupation, the coalition is calling for the return of Sarura Village to the homes from which they were forced out, an end to the systematic displacement of Palestinians, and a future of freedom, dignity, and equality for all. Contrasting with President Trump’s visit to the region next week and the many failures at the political level, Sumud: Freedom Camp demonstrates the power of grassroots leadership to create nonviolent resistance to discrimination, inequality, and occupation and build a future in which the civil and human rights of all people are recognized unequivocally. Camp organizers represent a historic coalition comprised of members of the Popular Committee of the South Hebron Hills, Youth Against Settlements, Holy Land Trust, Combatants for Peace, All That’s Left: Anti-Occupation Collective, and the Center for Jewish Nonviolence. Issa Amro, human rights defender and Founder of Youth Against Settlements said, “Each day we watch the building of more settlements and the further displacement of Palestinians. This has turned the ancient city of Hebron, where I was born, from a once a bustling epicenter of Palestinian life to a ghost town. Settlers roam the streets freely, carrying machine guns while my family and I face closures, restrictions, and checkpoints. The actions we are taking at Sumud: Freedom Camp to return Palestinian families to their homes are part of our ongoing struggle for justice, freedom, and equality.”

From his part, Sami Awad, Executive Director, Holy Land Trust said, “Sumud: Freedom Camp is a symbol for a new paradigm in the struggle for justice in Palestine and Israel. As part of the ongoing nonviolent movement to end the Israeli occupation, Sumud: Freedom Camp offers a model for a future where equal rights and equal access to the resources of this land are manifested, protected, and practiced.” In the meantime, Sulaiman Khatib, Co-Founder and Co-Director of  Combatants for Peace said, “”Sumud: Freedom Camp is a milestone in our path for dignity and freedom for both people. It’s important to take our faith in our hands and and to bring the day of peace . This is why I will be there and I welcome all people who support a just peace to join us.” Since the 1980s, the people of Masafer Yatta have been subject to a continued process of expulsion from their land. First, they were denied access to basic resources. The IDF sealed up their caves, destroyed their tents, and covered their water cisterns. Through systemic government policy, life was made unbearable until many chose to leave. Meanwhile, settlements and outposts in the area continue to expand, encroaching on the land of the people of Masafer Yatta, restricting their movement to Yatta nearby and to the rest of the West Bank. Those who stayed have experienced violence and harassment from local settlers that continue to this day. By 1998, all of the families of the Sarura village were displaced from their lands as a result of ongoing settler violence and harassment and denial of basic services and resources.

After decades of injustice, marginalization, and occupation – and a failed ‘peace process’ – rebuilding the village is an act of solidarity and resistance against the pervasive displacement of Palestinians and theft of their land for the creation of illegal Israeli settlements.

Netta Hazan, leading activist with Combatants for Peace said, “Sumud camp is an opportunity for Israelis and Palestinians to demonstrate mutual life of co-existence and not existing one on the expense of the other. The fact that we are opposing the occupation together, Israelis and Palestinians through mutual learning of non-violence methods and workshops, demonstrates the high importance of this camp.” From her part, Dana Mandler, Member, All That’s Left: Anti Occupation Collective said, “As a Diaspora Jew living in Israel and opposed to the Israeli Occupation, I am here to support and uplift the grassroots efforts of Palestinian and Israeli civil society as they take lead on creating a reality built on equal rights for all. I believe that creating long-term sustainable change requires genuine partnership under a locally-led, shared vision – this is what Sumud: Freedom Camp is.  This unprecedented partnership seeks to advance an equality-based reality driven by shared values of non-violence. “

The camp strives to create a safe, nonviolent, unarmed space where all those who believe in a future founded on justice, freedom, and equality can come together to build a foundation that will sustain a just peace.

Ilana Sumka, Director of the Center for Jewish Nonviolence, explained, “We are inspired by the steadfastness of the Palestinian grassroots nonviolent movement, and we are here as Jews because we know the importance of freedom and liberation for all people. It is telling that, as we recognize 50 years of occupation, this is our largest delegation ever: occupation is not our Judaism, and we are part of a growing movement that is ready to stand shoulder-to-shoulder with Palestinians and with our Israeli partners in this struggle for dignity and justice.”

Walking around his land, Fadel Aamar, resident of Sarura Village, said, “This area is very dear to our hearts. All of our lives used to revolve around this area, and we enjoyed living here until they pushed us out and forbid us from coming back. We are very thankful for the people who came today. It’s very uplifting for us to see these supporters. We hope that this movement continues. It means everything to me to be able to come back here – it brings back so many good memories.”

Sumud Freedom Camp organizers are calling on justice seekers across the region and around the world to join them physically in the camp or to take action where they are by calling for an end to Israel’s 50-year occupation and repression of the Palestinian people.