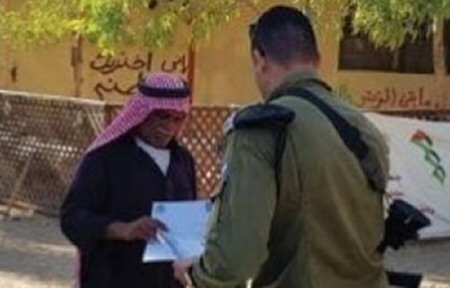 Activists from the Popular Struggle Coordination Committee, on Monday, carried out an activity in which they handed out “warning” notices to the Israeli civil administration, regarding the consequences of participating in the demolition of Khan Al-Ahmar Bedouin village, which is considered a crime against humanity by international humanitarian law.

Activists put up posters warning Israeli soldiers, against being tried in international courts as war criminals, if they took part in the evacuation of the Red Khan, which Israel intends to implement, giving the Bedouin population until the beginning of October to get out of themselves.

The warning says the following:

Any soldier, officer or police officer; any employee or person of other standing in the Israeli military and/or Civil Administration; any person who partakes in the planning or execution of the destruction of Khan al Ahmar and the forced removal of its people, you are hereby forewarned

As a party to the Statute of the Court, the State of Palestine and its territory falls under the jurisdiction of the ICC, allowing it to preside over any felony that amounts to genocide, crimes against humanity, war crimes or the crime of aggression committed within its territory.

After the activists put up the posters, a group of soldiers ran after and expelled the activists. Some of the activists managed to go onto a bus carrying Israeli soldiers, at the entrance, and handed them the warning posters, demanding them to stop serving the occupation army and refused to carry out acts inhumane and contradictory to international law.

Head of the High Coordination Committee, Munther Amira, told the PNN that this event represents a clear message, in that the occupation army is implementing a war crime punishable by international law.

“It is clear that Israel intends to carry out a new war crime to be added to its racist crimes since the establishment of the occupying state on the ruins and the plight of our Palestinian people and continues to commit more crimes,” Amira said, stressing the importance of striking the Israeli position even inside the occupation army.

For his part, activist Mohammed Khatib said that the letter refers to official responsibility before international law, and is intended to leave an impact on the lives of the occupation soldiers and the crime they commit.

Al-Khatib said that the Palestinian people will pursue the occupation soldiers and all those supporting the occupying state, in the international courts, since  the implementation of the demolition means that they are complicit in the war crime that Israel intends to commit.