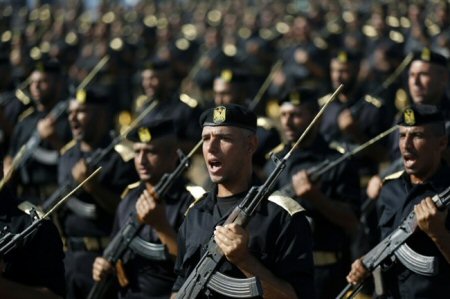 Members of the Palestinian security forces loyal to Hamas march during a graduation ceremony in Gaza City on December 4, 2014. (AFP/Mohammed Abed, File)

According to Ma’an, Greenblatt, who has visited Israel and the occupied Palestinian territory a number of times since Trump took office in January, began his statement by saying that “all parties agree that it is essential that the Palestinian Authority be able to assume full, genuine, and unhindered civil and security responsibilities in Gaza and that we work together to improve the humanitarian situation for Palestinians living there.”

“The United States reiterates the importance of adherence to the Quartet principles: any Palestinian government must unambiguously and explicitly commit to nonviolence, recognize the State of Israel, accept previous agreements and obligations between the parties – including to disarm terrorists – and commit to peaceful negotiations,” Greenblatt said.

“If Hamas is to play any role in a Palestinian government, it must accept these basic requirements.”

Shortly after the Palestinian unity government was formed, Israeli Prime Minister Benjamin Netanyahu reacted with similar sentiments, conditioning the acceptance of the deal on recognizing Israel and disarming Hamas, which Israel considers a terrorist organization.

According to Ynet news, Israel set a series of conditions that must be met before it would recognize the agreement. The condition included Hamas seizing all tunnel digging and missile manufacturing, “an end to terror attacks against Israel,” and the immediate release of Israeli citizens and return of the remains of Israeli soldiers being held by Hamas in Gaza.

Netanyahu’s statement following the agreement marked a significant softening of tone, compared to comments he made in 2011 during reconciliation talks, saying “if Hamas joins the Palestinian government we will not hold negotiations with the Palestinian Authority.”

The disarmament of Hamas and the future of its military wing has also been prioritized as a key issue in the deal by Palestinian President Mahmoud Abbas, who said he does not want a Hezbollah situation in Gaza, where the Fateh-led Palestinian Authority (PA) would administer the territory and Hamas would maintain its military power.

Numerous attempts have been made in the past to reconcile Hamas and Fateh since they came into violent conflict in 2007, shortly after Hamas’ 2006 victory in general elections held in the Gaza Strip.