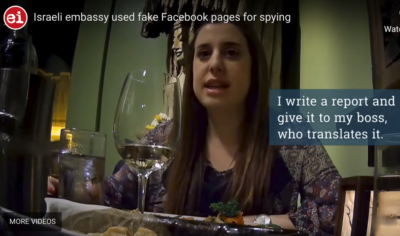 Julia Reifkind wrote reports on boycott, divestment and sanctions (BDS) activists, which were then sent back to intelligence agencies in Israel.

Her superior at the embassy did this via a classified server designated ‚ÄúCables‚ÄĚ which, Reifkind emphasized, ‚ÄúI don‚Äôt have access to because I‚Äôm an American.‚ÄĚ

The undercover footage also suggests that Reifkind was engaging in deception when she suggested that Palestinian students were behind an anti-Semitic incident on campus the previous year.

The footage is the latest leaked excerpt from from Al Jazeera‚Äôs¬†censored¬†film¬†The Lobby ‚Äď USA, which The Electronic Intifada has viewed in full.

In January 2015, painted swastikas were found on a Jewish frat house at the¬†University of California, Davis. Reifkind was then president of the student group Aggies for Israel, and had yet to be directly employed by the embassy.

Contrary to what she told journalists at the time, in the leaked Al Jazeera footage, Reifkind admits that the racist graffiti had almost certainly not been done by pro-BDS students, but was likely the work of white supremacists from off campus.

The effort to falsely implicate Palestine solidarity activists in the 2015 incident is particularly disturbing in light of the massacre of 11 Jewish worshippers at the Tree of Life synagogue in Pittsburgh on Saturday.

The gunman arrested after that attack is Robert Bowers, a white supremacist with a¬†history¬†of conspiratorial and virulently anti-Semitic social media postings.

Yet since the attack, leading Israel lobby figures¬†have¬†continued¬†to¬†defame¬†supporters of Palestinian rights as linked to the Pittsburgh massacre, and push for further crackdowns against them.

Talking points used by the party cast blame for the massacre on a ‚Äúleft-wing Jewish group that promoted immigration to the US and worked against Trump‚ÄĚ and echoed the gunman‚Äôs own anti-Semitic rhetoric.

Days before the 2015 graffiti incident at UC Davis, the student senate had¬†voted in favor¬†of boycotting Israel ‚Äď a major victory for the BDS movement.

Reifkind had already been accusing the student movement of anti-Semitism, and reacted to the graffiti by drawing media attention.

She and other pro-Israel activists strongly implied in the press that Palestinian and other pro-BDS students had been behind the swastikas ‚Äď without evidence.

Reifkind complained that university administrators had refused to blame the swastikas on campus Palestine solidarity activists.

AEPi, the Jewish fraternity on whose house the swastikas were found, also blamed the incident on Palestine solidarity activism.

‚ÄúOn campuses throughout North America and Europe, AEPi brothers have been leading the Jewish community and leading the student movement to defend Israel,‚ÄĚ the fraternity‚Äôs executive director¬†said. ‚ÄúBecause of that leadership, in the last few months alone, our brothers have been the targets of anti-Semitic attacks at a dozen universities,‚ÄĚ including ‚Äď he claimed ‚Äď UC Davis.

On its Facebook page, Reifkind‚Äôs group Aggies for Israel¬†posted a photo¬†of the graffiti. The group stated that ‚ÄúAEPi was clearly targeted‚ÄĚ due to its ‚Äústrong track record of championing pro-Israel causes,‚ÄĚ including campaigning against the divestment vote at UC Davis.

But in the footage, viewable above, Reifkind admits to Al Jazeera‚Äôs undercover reporter ‚ÄúTony‚ÄĚ that ‚Äúwe don‚Äôt even know‚ÄĚ who did the graffiti.

‚ÄúWe just think it was like some random white supremacist type people who just came, did it and left. We don‚Äôt think it was students,‚ÄĚ she states.

In the Al Jazeera film ‚Äď though not in the leaked excerpts ‚Äď she explains that Reifkind‚Äôs false allegations were ‚Äúhugely damaging‚ÄĚ to the group at the very moment¬†they had won a victory for BDS.

Obeid reacts to the undercover footage of Reifkind admitting the graffiti was likely the work of a ‚Äúrandom white supremacist‚ÄĚ by saying: ‚ÄúThat‚Äôs very surprising, because it was very clear from their behavior towards us and their attitudes towards us that we had done some heinous crime towards them and we deserved to pay for it.‚ÄĚ

The backlash that Reifkind and other anti-Palestinian activists drove was part of a general atmosphere of Islamophobic coverage of the divestment resolution.

Fox News, for example,¬†claimed¬†that pro-Israel students had been shouted down and ‚Äúheckled‚ÄĚ during the Student Senate vote.

In reality, as¬†video from the night¬†demonstrates, Reifkind was respectfully given¬†ample time to speak at the debate, where she harangued students as being part of a ‚Äúcampus plagued by anti-Semitism.‚ÄĚ

She was not heckled or interrupted even as she denounced the BDS movement as ‚Äúanti-Semitic and hate-promoting.‚ÄĚ She and her group then staged a walkout as a way to attract press attention, as they expected to heavily lose the vote.

At the time, in January 2015, Reifkind was a student and campus pro-Israel activist not yet employed by the Israeli embassy in Washington.

But in the clip, she admits to ‚ÄúTony,‚ÄĚ Al Jazeera‚Äôs undercover reporter, that as president of Aggies for Israel she had been in touch with the Israeli consulate in San Francisco.

Immediately after she graduated in 2016, her on-campus efforts for Israel paid off, and she was offered a job at the Israeli embassy in Washington. She spoke to ‚ÄúTony‚ÄĚ soon after, in September.

Her official title seen in a business card in the clip was ‚Äúdirector of community affairs.‚ÄĚ But as she explains to ‚ÄúTony‚ÄĚ in the film, her role mainly entailed ‚Äúmonitoring BDS things and reporting it back‚ÄĚ to agencies in Israel.

Neither Reifkind nor the Israeli embassy in Washington replied to Al Jazeera‚Äôs request for comment, and she left her role at the embassy in October 2017.

In the clip above, Reifkind describes her role as ‚Äúmainly gathering intel, reporting back to Israel. That‚Äôs a lot of what I do. To report back to the Ministry of Foreign Affairs, the Ministry of Strategic Affairs.‚ÄĚ

It is¬†run by a high-ranking¬†military intelligence officer,¬†Sima Vaknin-Gil, and staffed mostly from the ranks of Israel‚Äôs various spy agencies. The names of its operatives are mostly classified.

In the clip above, Reifkind describes to ‚ÄúTony‚ÄĚ how she monitors the activities of Students for Justice in Palestine, using several fake Facebook accounts.

‚ÄúI follow all the SJP accounts,‚ÄĚ she explains. ‚ÄúI have some fake names. My name is Jay Bernard or something. It just sounds like an old white guy, which was the plan. I join all these groups.‚ÄĚ

The ‚Äúintel‚ÄĚ she got from such activities was then fed into the classified ‚ÄúCables‚ÄĚ server via her boss at the embassy.

The surveillance seems to have been effective.

SJP president Marcelle Obeid explains in another part of the film that ‚Äúevery single event that I put on, you would have these pro-Israel groups coming out ‚Äď before our guests even got there ‚Äď with their cameras videotaping.‚ÄĚ

Reifkind, as the president of Aggies for Israel, received assistance from the Israeli consulate in 2015. In the same manner, she, as part of her role at the Washington embassy, gave pro-Israel groups all over the US ‚Äúour support, in that behind-the-scenes way.‚ÄĚ

This arms-length approach through front organizations is key to how Israel operates in the West.

In 2016, the Israeli embassy in London¬†warned¬†in a cable that the strategic affairs ministry was ‚Äúoperating‚ÄĚ British Jewish organizations behind the embassy‚Äôs back in a way that could put them in violation of UK law.

It later emerged ‚Äď from an Al Jazeera film about the Israel lobby in the UK¬†broadcast last year¬†‚Äď that the embassy was attempting to ‚Äútake down‚ÄĚ a British minister deemed critical of Israel.

In the US, Reifkind was also active with the powerful lobby group¬†AIPAC¬†while she was on campus. In another part of the censored film she explains to ‚ÄúTony‚ÄĚ that ‚ÄúWhen you‚Äôre lobbying on behalf of AIPAC, you never say you‚Äôre AIPAC, you say, ‚ÄėI am a pro-Israel student from UC Davis.‚Äô‚ÄĚ

The undercover footage of Reifkind explaining her activities shows how Israel ‚Äď with total impunity ‚Äď spies on and disrupts US citizens involved in lawful advocacy for Palestine.

A key Israeli front organization spying on US students is the¬†Israel on Campus Coalition, as The Electronic Intifada¬†revealed in its reporting¬†on a previously leaked clip of¬†The Lobby ‚Äď USA.

The film indicates that the Israel on Campus Coalition is connected to the anonymous blacklisting site¬†The Canary Missionon behalf of multimillionaire pro-Israel financier and convicted tax evader¬†Adam Millstein.

In undercover footage yet to be leaked, the Israel on Campus Coalition¬†admits¬†to coordinating its covert spying and sabotage campaigns with Israel‚Äôs strategic affairs ministry. Like other groups profiled in the film it did not respond to Al Jazeera‚Äôs requests for comment.

Al Jazeera‚Äôs film raises questions about the nature of Israel‚Äôs network of front organizations in the US and to what extent they may be violating the law in acting as undeclared agents for a foreign state.

As Reifkind sums up to Tony in the clip above, ‚ÄúI can‚Äôt say anything negative about Bibi [Israeli Prime Minister Benjamin Netanyahu] or the government because I definitely work for them. Not directly. I‚Äôm just a normal American.‚ÄĚ