Residential Structures near Jericho to be Demolished 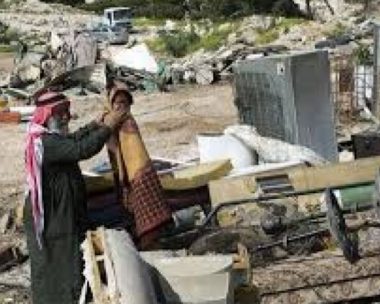 Israeli forces served notices, on Sunday, ordering Palestinian Bedouin families living near the village of Nuway’imah, to the north of Jericho in the West Bank, to leave the residential shacks where they live prior to demolishing them, according to local WAFA sources.

Governor of Jericho Majed al-Fetyani condemned the Israeli military order describing it as a “forcible transfer” of the original Palestinian population from the area.

Israeli forces have frequently demolished residential structures, including tents and shacks, as a means to forcefully displace Palestinian citizens and confiscate their lands.

Having no other choice, many Palestinians in Area C of the West Bank, under complete Israeli control, are forced to build without permits to be able to provide a shelter for their families, risking having their buildings demolished.