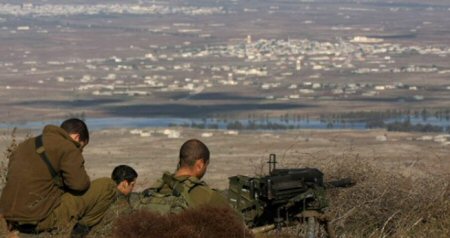 Following last week’s extensive military activity, which saw projectiles landing in the occupied Syrian Golan heights, Al-Marsad, the independent, non profit human rights organisation, reiterates its call for the removal of Israeli army posts from Syrian civilian areas. Since its occupation of the Golan heights in 1967, Israel has constructed army posts and bases, laid landmines and erected a fortified fence to maintain control over the region and its Syrian population.

As a result, there are multiple Israeli army posts and bases in and close to Syrian residential and agricultural areas. Their presence puts the Syrian civilian population at risk of stray fire and is unlawful. The danger is tragically all too real. During the 1973 Arab-Israeli War, approximately 20 Syrian civilians were killed during an attempted military strike on an Israeli military post in the village of Majdal Shams in the Golan.

As an occupying power, Israel has a legal obligation under international humanitarian and human rights law to protect the lives of Syrians in the Golan.  Article 48 of the Additional Protocol to the Geneva Conventions of 12 August 1949, says that Parties must ensure respect and protection of the civilian population and civilian objects. Article 6 of the International Covenant on Civil and Political Rights requires State Parties to address threats to life and life-threatening harm and injuries that may result in loss of life.

Furthermore, PNN reports, both international humanitarian law and Israeli military law provide that military objectives such as army posts should not be within or near densely populated areas. Article 58b of the Additional Protocol requires that Parties ‘avoid locating military objectives within or near densely populated areas’. Israel’s own Manual on the Laws of War (1998) prohibits ‘mingling military targets among civilian objects, as for instance, a military force located within a village or a squad of soldiers fleeing into a civilian structure’.