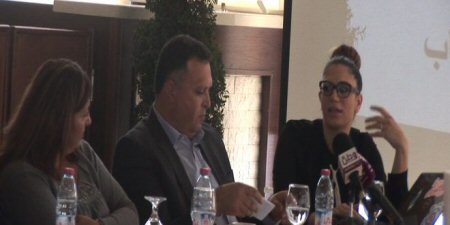 Palestinian journalists and human rights activists, this week, highlighted the various violations committed against them in the Palestine, whether out by Israeli occupation or the violations by the Palestinian authorities, in the West Bank or the Gaza Strip.

PNN reports that the Seminar was organized by the United Nations Educational, Scientific and Cultural Organization (UNISCO) in cooperation with Wattan Media Foundation. The seminar was about ending impunity for crimes against Palestinian journalists as part of the International Day for ending impunity for crimes against journalists. The seminar was held at the Carmel Hotel in Ramallah where the Journalists Association Representative and a group of chief editors from various Palestinian News Networks.

The Seminar started with a welcoming speech by UNESCO and Wattan Agencies, followed by an introductory speech on the International Day for Ending Impunity for crimes against journalists, and the importance of this day to protect journalists and safeguard their rights.

Coordinator of UNESCO’s Communication and Information Program, Hala Tannous, said that the seminar is for reducing infringements, noting the importance of unified Palestinian action to stop attacks on journalists.

Tannous said that UNESCO is now trying to communicate with various international institutions on the one hand and the local community on the other to stop ignoring the international agreements which Palestine signed, as they emphasize on respecting freedoms, protecting journalists and holding accountable those who attack them.

Director general of Watan TV,  Moamer Orabi, said that the seminar discussed the mechanisms that can be used by the involved authorities, headed by the Palestinian Journalists Association to punish anyone who attacks journalists and violates their rights.

She explained that the seminar most important’s message is to raise their voices and expose those who violate their rights. Adding that Palestinian officials must condemn any violations and also to hold accountable and punish all those who violate the rights of journalists.

The Journalists Association Representative, Nasser Abu Bakr, said in a speech that the union is ready to adopt all recommendations of the seminar, pointing out that the union is working on finding modern laws that serve the profession of journalism. He pointed to a number of attacks against the press profession in Palestine.

Abu Bakr pointed out that the most prominent result of the Israeli decision is the closure of the media and the arrest of journalists, the last of which was the closure of eight Palestinian press offices in various provinces of the country.

For his part, member of the seminar of Journalists, Montasser Hamdan, said that the union rejects the violations against Palestinian journalists regardless of their source and outlet local or external levels represented by the Israeli occupation. Adding that if violations continue in Palestine weakens the official Palestinian position. A series of international conventions and the continuation of the violations, this shows Palestine as a state that does not respect the principles of human rights, which affects the classification of Palestine as a state that respects human rights on the international level.

Palestinian journalist, Walid Batrawi, said that the violations against journalists occur everywhere in the world, but in Palestine there is a distinctive type of negative discrimination against journalists. What journalists need is a strong and effective body to defend their rights and not through international organizations but through local institutions and stand up to all these violations.

This seminar is an important step in the quest to promote the rights and freedoms of the press, especially in light of efforts and plans to develop laws that may restore freedoms for decades in the Palestine especially,the Electronic Crimes Law.