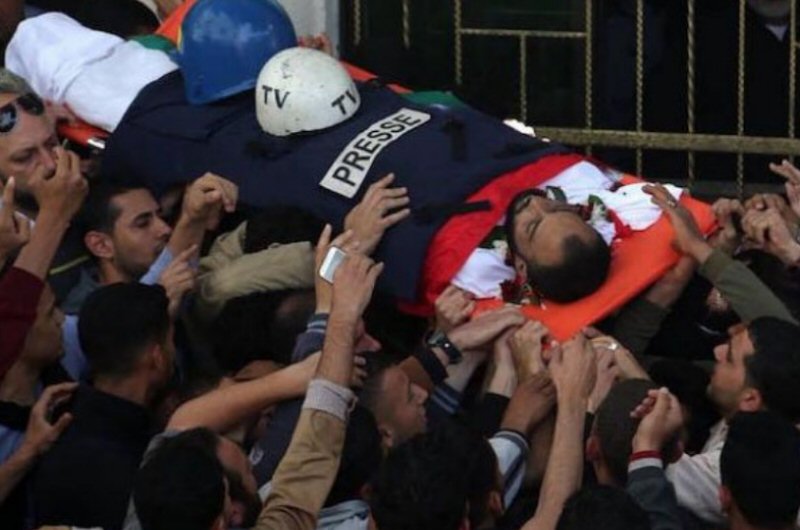 Reporters Sans Frontiers (Reporters Without Borders) has called for an urgent investigation, after the murder of the second Palestinian journalist, since the start of a major wave of protests along the border between Gaza and Israel.

Aged 25, Ahmed abu-Hussein died early this week from the gunshot injury he sustained on 13 April. According to Rami el Sharafi, a fellow reporter for Radio Sout al Shaab, he was 700 metres from the border, in a calm place near a group of static demonstrators, when he was suddenly brought down by a clearly direct and deliberate shot.

At the time, Hussein was wearing a royal-blue helmet to which the fluorescent yellow letters “TV” were affixed, and a bullet-proof vest bearing the word “Press.” This is confirmed by amateur video footage. As well as for Radio Sout al Shaab, Hussein was also working for the Bisan News website.

“Why was this journalist deliberately targeted when he was several hundred metres from the border? We call on the Israeli and Palestinian authorities to launch an independent investigation without delay and to do whatever is necessary to ensure that those responsible for this deliberate crime against press freedom are brought to justice.”

Hussein’s death comes less than a month after that of Yasser Murtaja, a reporter who died on the night of 6 April after being shot earlier that day by Israeli soldiers while covering the “Great Return March” demonstrations by Palestinians at the border. He was also wearing a “Press” vest that clearly identified him as a journalist.

At least nine other Palestinian journalists have been injured by Israeli soldiers since the wave of protests began on 30 March.

Most were hit by explosive or dum-dum type rounds. According to the NGO Médecins sans Frontières, the injuries have been extraordinarily devastating.

Youssef al Kronz, a freelance photographer who was hit in both legs while covering the 30 March demonstration from a position 750 metres from the border, ended up having to have much of his left leg amputated. He was also wearing a vest that clearly identified him as a journalist.

Israel is ranked 87th out of 180 countries in the latest World Press Freedom Index.