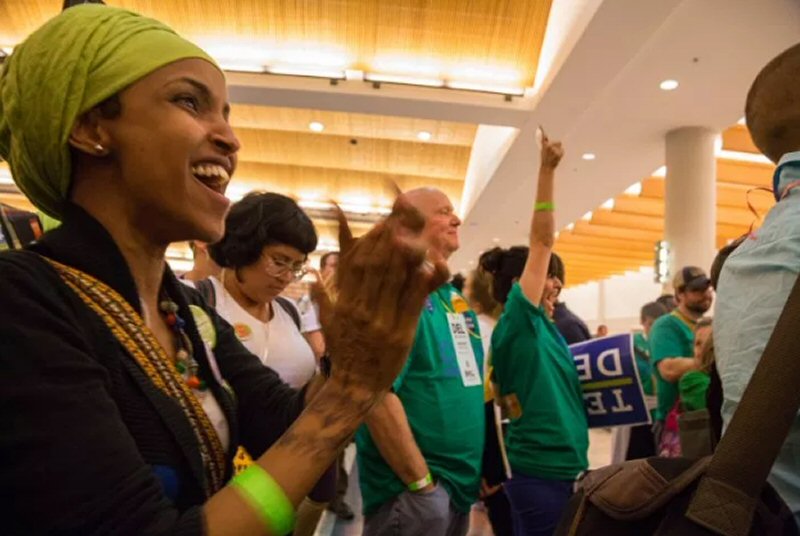 Samidoun: Palestinian Prisoner Solidarity Network stands with Ilhan Omar, a strong supporter of Palestine elected to the United States House of Representatives last November, and urges a broad mobilization to defend her against media and political incitement by Israel and its allies.

Rep. Omar is one of only two endorsers of the Palestinian Boycott, Divestment and Sanctions (BDS) movement in the 541-seat Congress. She is also an outspoken critic of Israel’s crimes against Palestinians and has joined demonstrations protesting them in her district around Minneapolis, Minnesota.

These strong positions, unheard of in Washington, D.C.’s halls of power until this year, as well as Rep. Omar’s identity as an immigrant, the first Somali-American, and one of the first two Muslim women elected to Congress, have drawn harsh reactions from Israel’s reactionary supporters, as well as the Israeli state itself.

While a ferocious offensive targeting her gained widespread attention over the past day and a half, the ongoing campaign of racial, religious and political harassment against Rep. Omar began long before her election. Rep. Omar said nothing wrong. Her first tweet quoted a relevant line from a well-known song by hip hop artist Sean Combs, while her second repeated a truism understood by most observers of U.S. politics, especially on Capitol Hill. And as a vocal supporter of Palestine and its liberation movement, nothing else she could have done, short of adopting the Zionist politics of her opponents, would have averted their malice.

In the aftermath of her tweets, Rep. Omar faced a torrent of abuse on the Internet, including from a daughter of two notorious war criminals, who berated a former refugee from a country invaded by her father “as an American,” and an editor of a Zionist newspaper in New York, who sought to link her with the Ku Klux Klan.

More concerning were attacks on Rep. Omar from within Congress, including a pledge by Kevin McCarthy, the House Republican leader with a history of actual anti-Semitism on Twitter, to “take action this week,” and a demand by Steve Scalise, a disgraced Louisiana Representative who once spoke at a white supremacist convention organized by former Ku Klux Klan leader David Duke and boasted to a journalist he was “like David Duke without the baggage,” that “Dem leaders remove her from the Foreign Affairs Committee.”