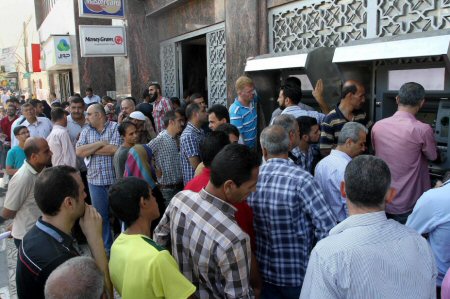 According to PCHR’s investigations, the PA has decided to cut the salaries to about 5043 employees, including 263 employees of the Ministry of Health and 402 employees of the Ministry of Higher Education, in the Gaza Strip. These employees work in hospitals, clinics, health centers, and education directorates in the Gaza Strip governorates. The employees whose salaries were cut include 68 doctors (48 medical specialists and 20 doctors) distributing throughout the hospitals of the Health Ministry: al-Shifa, European and al-Nasser Pediatric. Among the Ministry of Higher Education employees, whose salaries were cut, are 246 teachers while the rest are headmasters, their deputies and administrative staff.

According to PCHR’s follow-up of the salaries crisis, the Palestinian Authority cut the salaries to 263 employees in the Ministry of Health in Gaza.  This will be added to the various crises which the health sector suffers from and would negatively affect the quality of health service and risk the life of patients who receive their treatment in the Intensive Care Unit and Oncology Departments, particularly that of those employees whose salaries were cut are doctors in the European and Shifa hospitals and Naser Pediatric Hospital in addition to the other clinics and healthcare centers.  According to sources in the Ministry of Health, these employees whose salaries were cut are the backbone of the healthcare sector in Gaza as they represent 67% of the medical specialists and 28% of the doctors in the Ministry of Health.

Dr. Zeyad Thabet, Undersecretary of the Ministry of Higher Education, said to a PCHR’s fieldworker that the cutting-salary policy affected 402 teachers and employees in the Ministry of Higher Education in the Gaza Strip.  He added that these measures have serious impact on the educational process especially that they come following a series of sanctions, including the enforced retirement and financial constraints on the teachers in this sector that result in a psychological impact on teachers making them incapable of securing their obligations towards their sons who are students at universities and schools and even not being able to supporting their family members.  Dr. Thabet also said that in case the Ministry in Gaza resorted to securing the minimum dues of the employees whose salaries were cut, this would be at the expense of the operational expenses of the Ministry and its directorates.

PCHR warns of  the ramifications of the Palestinian government’s decision on THE health and education rights in the Gaza Strip. Thus, PCHR: