Saudi Paper: “Prisoner Swap Between Hamas And Israel Might Be Held Soon” 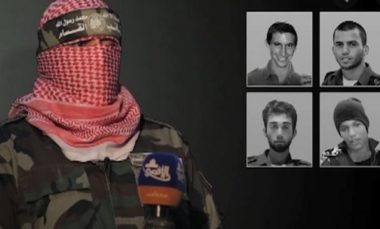 According to the Saudi daily Elaph News Agency, senior sources informed its reporter that Hamas movement in the Gaza Strip, and Israel, are slated to conduct a prisoner swap as soon as the coming al-Fitr Muslim feast.

Elaph stated that the first stage of this potential prisoner swap agreement is the easy phase, however, the second phase is more complicated as it involves demands for releasing Palestinian detainees serving life terms, including those who were rearrested after their release as part of the Shalit prisoners’ swap agreement, and their life-sentences were reinstated.

It added that Israel has apparently agreed to release all child and ailing detainees in the first phase of the new deal, in exchange for the release of Avraham Mengistu, an Israeli civilian who crossed into Gaza during the 2014 Israeli offensive and has been held by Hamas since then, and Hisham Sayyed, from an Arab Bedouin family in the Negev, who went missing in early 2016, in addition to receiving information about the two soldiers, Oron Shaul and Hadar Goldin, who are believed to have been killed during the Israeli offensive on Gaza in the summer of 2014.

Yahia Sinwar, the leader of the Hamas movement in Gaza, has recently stated that he suggested what he called a “humanitarian prisoner swap deal,” during the current coronavirus crises.

Sinwar proposed holding a swap deal that would secure the release of the detained Israelis in exchange for freeing all children, women, and the elderly Palestinians imprisoned by Israel, in addition to all detainees who are suffering from serious health conditions.

Both Hamas and Israel have entered indirect talks mediated by Egypt, however, German, Swiss, and Russian mediators are also involved in these efforts.

It is worth mentioning that the spokesperson of Hamas and a member of its political bureau, Husam Badran, has stated that Hamas wants a “huge achievement” in the swap deal, “but is not keen about discussing the details with the media.”

He stated that when such indirect talks remain away from the media, it is likely that more positive outcomes would be achieved.

During a press conference on Sunday, Israeli Defense Minister, Naftali Bennett, was asked about the possibility of a prisoner exchange deal but refused to comment on the issue.

Last Wednesday, Israeli Transport And Road Safety Minister, Bezalel Smotrich, stated that he intends to oppose any prisoner swap agreement between Israel and Hamas, and added that Israeli Prime Minister Benjamin Netanyahu has rejected his call for holding a session of the state Security Cabinet, to discuss these issues.

Despite all these statements, the likelihood of a deal as soon as the al-Fitr feast remains elusive.

It is worth mentioning that Israel is holding captive more than 5000 Palestinian detainees, including 41 women, 180 children, in addition to 430 who are held under the arbitrary Administrative Detention orders without charges or trial.