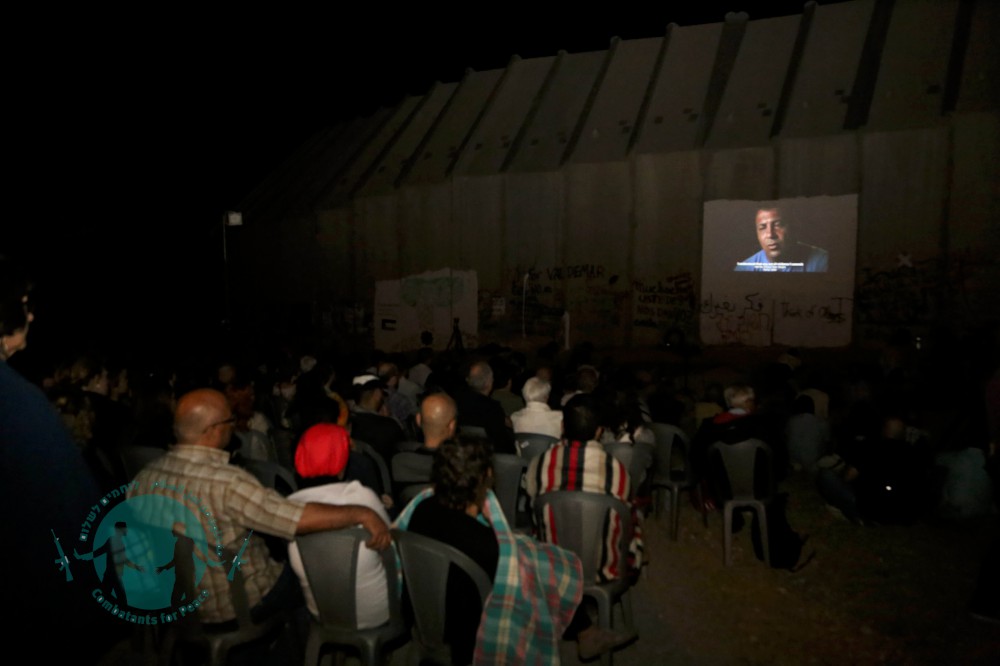 As part of Combatants for Peace 10 years anniversary and in cooperation with Cinema for Peace foundation Berlin, CFP organized on Thursday night at the town of Beit Jala near Bethlehem, a screening of Disturbing the Peace film by Steve Apkon and Andrew Young.

The film was projected on the Israeli wall separating the southern West Bank city of Bethlehem from Jerusalem. The event was organized near the house of Abu Michael, where the Israeli army destroyed his land and cut off his trees to build the wall back in 2004. Disturbing the Peace, conveys the inspirational universal story about the human ability to see beyond the narratives which we tend to accept as reality, and challenging convention in the struggle for freedom.

It follows its protagonists, Israelis and Palestinians, as they go from participating in violent action in the Israeli-Palestinian conflict, to becoming activists in the Combatants for Peace movement, which seeks to end the violence between both sides. Throughout their journey, they encounter the opposition of their respective societies that which see them as traitors. This collaboration was part of cinema for peace global screening series “Wall Screenings” with the aim to raise awareness about walls and borders that separate people. the series was developed as part of the symposium on the occassion of the 25th anniversary of the fall of Berlin wall. the series started in 2015 in Ciudad Juarez in Mexico. Since then, there have been several screenings worldwide. In December 28th, Cinema for Peace hosted the first screening event in Cooperation with Cinematheque in Jerusalem. Since 9/11 the non-profit organization Cinema for Peace has been aiming to influence through films the perception and resolution of global society, political and humanitarian challenges in our time.

“With the making of Disturbing the Peace, we were so grateful to have the opportunity to meet and share the story of so many Palestinian and Israeli ex-combatants who have had the courage to lay down their weapons and work together through nonviolence to end the Occupation and the conflict, and to secure freedom and security for both peoples.” Steve Apekon, director of Disturbing the Peace. For the past ten years, Combatants for Peace primarily has been working at the street level in the two communities, encouraging people to take joint Israeli-Palestinian action against the on-going occupation and violence. The Movement’s activities are based on a number of Israeli-Palestinian regional groups whose members work in the field and use various tools to provide collective opposition to Israeli military rule and to promote bi-national nonviolent interaction.

“The film follows people who have been directly involved in violence, who could have been targets for one another. It shows their transformation, our transformation to a non-violent struggle against the occupation and the violence between the two people. It shows that such a transformation is possible, that it’s necessary. I believe it makes it important.” Israeli-cofounder and one of the CFP members in the filme Avner Wishnitzer said. “Our movement prove that joint non-violence together is the way ahead to exit the cycle of hatred and build better future for all of us It shows that personal transformation is possible Peace between our peoples is achievable.” Sulaiman khatib, Palestinian CEO-cofounder of CFP and one of the characters in the film.

CFP believes that the conflict cannot be resolved, through military means, by either of the parties, but only through joint action, can we break the cycle of violence and put an end to the Israeli occupation of the Palestinian territories. The movement calls for the establishment of an independent Palestinian state with its capital in East Jerusalem, based on the border of June 4, 1967, alongside Israel.