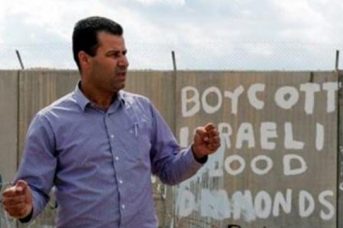 The Ofer Israeli military ordered, on Monday at night, the release of internationally recognized human rights defender, and the coordinator of the Popular Committee against the Wall and Settlements in Bil’in village, Abdullah Abu Rahma, after he was held for eleven days. He was released on Monday at night, and will have to go back to court in June.

Abu Rahma was sent to court several times since his abduction, while the Israeli military prosecutors demanded his continued detention, using various methods, including attempting to abuse his previous suspended sentence, as he was repeatedly abducted and detained in recent years.

The army also tried to claim that Abu Rahma entered a “closed military zone,” “obstructing the conducts of the soldiers,” and even an allegation of “beating a soldier.”

But his abduction, on May 13, 2016, was documented by many reporters, as he and dozens of Palestinians and international peace activists participated in the “al-Awda” (The Return) cycling competition.

|Soldiers’ Testimonies Against Nonviolent Activist Contradict Each Other|

The videos proved that Abu Rahma did not assault any soldier, and also showed many soldiers using excessive force against him.

The court released Abu Rahma, at night Monday, and ordered him to appear in court on June 1st, and to pay a 15.000 Shekels bail.

Following his release, Abu Rahma said he has the right to Freedom of Speech, and to take part in the legitimate nonviolent resistance, guaranteed by International Law, and added that Israel’s conducts violate this law, and the Fourth Geneva Convention.

Abu Rahma added that the Palestinians, and their supporters, will continue their nonviolent resistance, and that the Israeli assaults, intimidation and violations, will not deter them from continuing the legitimate struggle until achieving all internationally guaranteed rights.