Soldiers’ Testimonies Against Nonviolent Activist Contradict Each Other 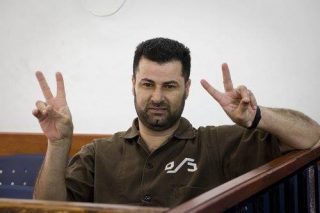 The Popular Committee against the Wall and Settlements in Bil’in, near Ramallah, said that testimonies by Israeli soldiers against nonviolent activist Abdullah Abu Rahma, are contradicting each other, while the prosecutor keeps pushing for his continued detention.

Abu Rahma was kidnapped several days ago during a nonviolent protest marking the Palestinian Nakba, in Bil’in village, west of Ramallah, and was sent to court on May 17, when the judge said the he should be released instantly despite the prosecutor’s demands.

The judge stated that the two soldiers, who provided false testimonies, should be the ones behind bars, and recommended investigating them, although he did not issue a warrant for their arrest.

But, the prosecutor had a different opinion, and called four additional soldiers to testify against Abu Rahma, in an attempt to increase the pressure and ensure his continued detention.

Abu Rahma family said the Israeli prosecution demanded holding him under interrogation for eight additional days, but the judge granted them one day.

The third court session was held on Thursday, October 19, and the prosecutor presented a case that lacked any real indictments, yet, supported by soldiers’ ‘eyewitness’ testimonies, that made no real sense.

The judge then ordered Abu Rahma’s release and set a 15000 Israeli Shekels bail, but the prosecutor appealed and asked for additional 72 hours.

Dr. Rateb Abu Rahma, media coordinator of the Popular Committee and Abdullah’s brother, said the prosecution described Abdullah as a person who “constantly violates law and order,” through his continued activities, and described him as a central figure in them.

He added that when the soldiers kidnapped Abdullah, it was during a sports activity in the village, and not even during one of the legitimate nonviolent protests, and that the soldiers assaulted and beat him continuously.

The prosecutor tried to label Abu Rahma’s nonviolent activities in Bil’in as a “constant danger”, and alleged he “attacked soldiers,” and “entered a closed military zone,” in addition to “not abiding by instructions given by the army.”

Lawyer Hafeth Bornat, who attended all sessions, said the lawyers who represented Abu Rahma managed to prove, including through videos, that all of the allegations are false, and that his abduction and imprisonment are illegal, but still, the prosecutor appealed.

“The court called other soldiers to testify, despite the falsification and illegal conducts of the army and the prosecutor – during the three previous sessions, all what we heard was contradicting testimonies,” the lawyer said, “It became clear that the indictments are baseless, and that is why the first and second rulings were made to release Abdullah, but now, by all means, the prosecutor wants to keep him imprisoned.”

The Popular Committee against the Wall in the West Bank strongly denounced the ruling to keep Abu Rahma detained, and described it as a political, racist ruling targeting all nonviolent popular resistance activists, part of Israel’s continued efforts to silence this resistance that exposes the true face of the illegal occupation, and its apartheid policies.

It demanded European officials, and representatives of local, regional and international human rights groups, operating in Palestine and Israel to attend the Abdullah’s upcoming court session scheduled for this Sunday, May 22, in the Ofer Israeli prison near Ramallah, at three in the afternoon.

It is worth mentioning that that Joris Van Winckel, the European Political Affairs Officer – EU representative, a number of peace activists and the immediate family of Abu Rahma, attended the latest court session.