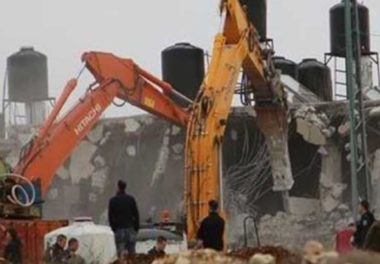 Tayseer Khaled, a senior member of the Palestine Liberation Organization(PLO), said this week that Israeli policy of Palestinian homes’ demolition constitutes a war crime, an act of collective punishment that violates International Law.

Khaled’s remarks came in the backdrop of a recent United Nations’ report on the humanitarian situation in the occupied Palestinian territories, which suggested that the number of Palestinian homes, demolished by Israel, increased by %45 in 2019, compared with the year 2018.

A statement by Khaled, released to media outlets, called on all concerned international bodies to make sure that Israel applies all relevant international laws and conventions, pertaining to the prevention of homes demolition, which results in forcible transfer of civilian Palestinian residents in the occupied West Bank.

The statement added that current Israeli demolition of Palestinian homes is considered a form of collective punishment, which is prohibited internationally.

It cited United Nations Security Council’s resolution 1544 of 2004, which clearly stipulated that Israel is obliged to respect international humanitarian law.

It further noted that the Israeli policy of homes demolition is a flagrant violation of the Fourth Geneva Convention of 1949 for the Protection of civilian persons in times of war, as well as article 17 of the Universal Declaration of Human Rights, issued in 1948.

The PLO’s senior member called on the international community to take the lead by pressuring the Israeli government or even imposing sanctions on Israel so that the latter would halt its policy of home demolitions.