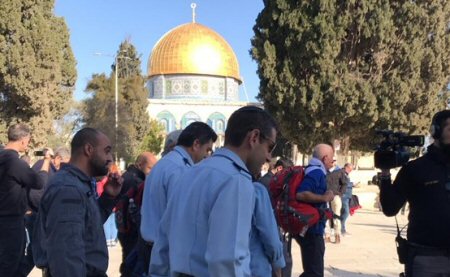 A large number of Israeli settlers and Israeli police stormed the Dome of the Rock, inside the Al-Aqsa Mosque compound, in the Old City of Jerusalem, on Thursday afternoon.

Head of the public relations office at the Islamic Endowment Department, Firas al-Dibs, confirmed that 41 Israeli settlers and 85 members of the Israeli police force stormed the compound through the Moroccan Gate.

Al-Dibs said, according to Ma’an, that Israeli police were deployed heavily across the area, and that a number of Israeli police stormed the Dome of the Rock mosque, which is situated inside the Al-Aqsa compound, and several Israeli settlers entered into the women’s prayer space, while Muslim women were performing prayers, inside.

In the video below, Israeli settlers are seen inside the women’s prayer space: