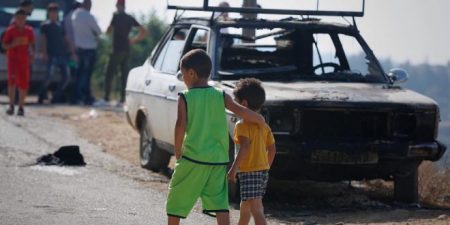 The head of the village’s council, Marwan Sabah, said that a group of settlers attacked the town in the early hours of yesterday morning and burned two vehicles belonging to local residents of the village.

Sabah added, according to the PNN, that the Jewish settlers also painted slogans vowing revenge from the town’s residents, following the killing of three in the illegal Helmish settlement, which borders the Palestinian town in the north of Ramallah.

In days past, Israeli settlers of the Helmish and Ateret settlements carried out several attacks against Palestinian properties in the village, he noted.

Violent clashes between Palestinians and Israeli forces also broke out today, in Ramallah’s northern village of Kubber, after forces brutally stormed the town amid heavy fire of rubber-coated bullets and tear gas bombs.

According to locals, a young Palestinian was hit by a rubber bullet during the clashes, while two relatives of a Palestinian prisoner were detained. The town’s entrance was also closed.