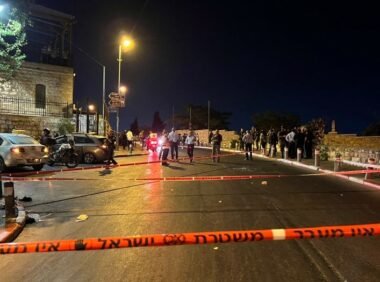 Amir Saidawi, who turned himself in to an Israeli police station after allegedly shooting and injuring eight Israelis on a bus in Jerusalem Sunday, has a long criminal history including having previously been suspected of murder.

Saidawi had been suspected of murder in a crime committed in 2015, but was instead convicted of causing serious bodily harm. He was sentenced to eight years in prison, but was released after 5 years, in 2020. He is 26 years old, from East Jerusalem.

On Sunday August 14th, Saidawi allegedly shot at Israelis in two separate locations – first at a bus, in which two adult males were wounded, and then opened fire again, wounding another six people, four of whom are family members from the United States.

Israeli police say they believe Saidawi acted alone, and that he is not associated with any armed groups.

The attack comes just a week after Israeli forces launched a massive invasion of Gaza, killing 43 people, including 15 young children. Gaza is one of the most crowded places on Earth, and Israeli attempts to engage in extrajudicial assassinations there by firing missiles at residential buildings usually result in many civilians being killed and maimed.

Israeli sources said eight Israelis were injured in a shooting attack in occupied Jerusalem, including two in serious conditions.

Update: Israeli media outlets said a 27-year-old Palestinian from East Jerusalem turned himself in to police following ongoing searches for him throughout the night.

An Israeli Police spokesperson said the man was moved to an interrogation facility, and his gun was confiscated.

The Quds News Network said the young man has been identified as Amir Saidawi.

According to Israeli reports, the shooter opened fire at an Israeli bus in two different areas, on HaShalom Street, and near the Old City, before fleeing the scene.

The woman, in her thirties, underwent surgery at Shaare Zedek Medical Center; her baby’s condition was described as serious-but-stable.

The Israeli army invaded and ransacked dozens of homes in Silwan town, in Jerusalem, interrogated scores of Palestinians while inspecting their ID cards, and abducted many young men.

Among the abducted Palestinians are Asma’ Shiokhy, her sons  Monatser and Karim, and her daughter mother Asma’.

The soldiers also abducted Maher Sarhan, the son of Samer Sarhan who was killed by a private Israeli security guard in the year 2010.

After the shooting, dozens of Israeli soldiers invaded Silwan town, south of the Al-Aqsa Mosque in Jerusalem, reportedly looking for the shooter.

The Wadi Hilweh Information Center In Silwan (Silwanic) said dozens of soldiers and police officers invaded the town, especially the al-Bustan neighborhood, and initiated massive searches after closing and isolating the area.

On Saturday, Medical sources reported that a Palestinian child from Beit Ummar town, north of the southern West Bank city of Hebron, lost his eye after Israeli soldiers shot him with a rubber-coated steel bullet.

The child was shot by a soldier in the fortified military tower at the main entrance of the refugee camp when dozens of Palestinians marched against the seriously escalating Israeli violations, including the recent offensive on Gaza, the killing of a Palestinian in Hebron, and the assassination of the three Palestinians in Jenin.

Hebrew sources: 5 injured, including 3 in serious condition, in the shooting attack on an Israeli bus in Jerusalem, and the perpetrator withdrew from the scene of the operation. https://t.co/XtMniaL0ey